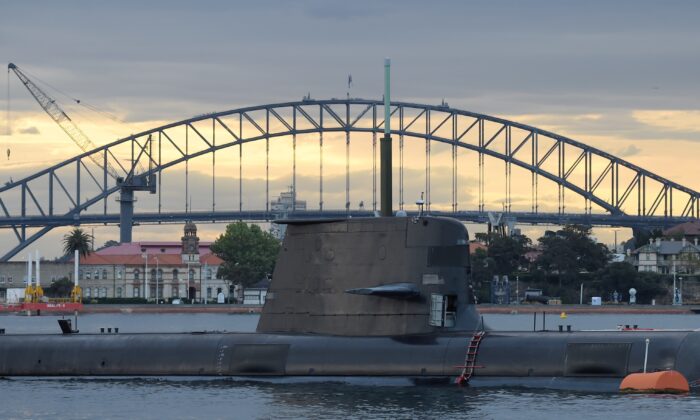 The European Union’s outgoing ambassador to Australia says the bloc remains ready and willing to sell Canberra military equipment to plug any capability gaps arising from the cancellation of a French submarine contract.

The first nuclear-propelled submarines to be delivered by the US or UK under the new AUKUS agreement will not be ready for more than a decade.

“There is a long-standing defence cooperation between European Union and Australia,” ambassador Michael Pulch told AAP in an interview.

“Frigate purchases, petrol boats … and armoured vehicles do come from Europe, and we continue to work together in that defence cooperation space.

But Pulch says while Europe remains open to exporting arms to Australia, open tender processes are being followed.

“It is, of course, decisions by the Australian government – which kind of armament or weaponry they choose,” he said.

“We are not, as the European Union proposing this. There are tenders that have to be done by the Australian government and then decided upon what offers they get.”

Europe has also pushed for further cooperation in the artificial technology and cybersecurity space, with Brussels sending a letter of invitation to Australia to join a $146 billion research fund as an associate member.

“This would be a next important step because, in that program, we can also combine research on issues like artificial intelligence, cyber technologies, health, so a lot of topics that have a security dimension to it,” Pulch added.

It comes as European forces made their way to Australia for Exercise Pitch Black alongside Asian partners.

German fighter jets were deployed to Singapore within 24 hours ahead of the exercise in the Top End from August 19 to September 8.

German air chief Lieutenant General Ingo Gerhartz said this was done to show the rapid deployment of the air force and prove Europe can quickly send fighter jets to Asia.

“It doesn’t matter whether you need to be in Asia or somewhere else, it’s just a matter of proving the air force can be deployed with that speed,” he told the ABC on Friday.

“Especially now looking to the situation in Europe, having a war on in front of our door, we were the first responder when Putin invaded Ukraine. We put Eurofighters to the eastern flank of NATO within hours.”

Defence Minister Richard Marles has announced a review of Australia’s defence capabilities to identify any gaps and how they can be plugged.

The review is set to be handed to the government in March 2023.