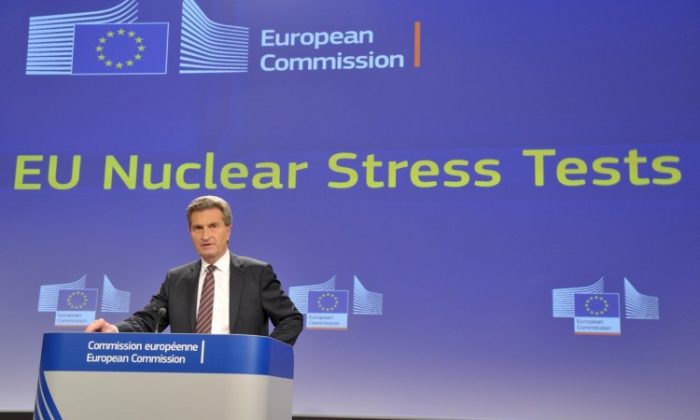 Press conference by Günther Oettinger, Member of the EC in charge of Energy on nuclear stress tests (European Commission)
Europe

A review of nuclear power plants across Europe by the European Commission recommended improving safety features on nearly 145 reactors.

The review involved “stress tests” designed to assess the safety and robustness of nuclear power plants in case of extreme natural events, and was issued by the European Council in the aftermath of Fukishima, Japan.

The Commission concluded that no closure of nuclear power plants was warranted, despite finding that not all best practice standards promoted by the International Atomic Energy Agency (IEAA) were adopted across 17 European countries.

Commenting on the findings of the review, EU’s Commissioner for Energy Günther Oettinger said: “Generally, the situation is satisfactory, but there is no room for complacency.”

Mr Oettinger confirmed that bringing plants up to standard could cost anywhere between 10 billion and 25 billion euros ($A12.8 billion and $A31.5 billion), according to AAP.

The stress tests found that staff at 37 per cent of the reactors did not use modern standards to assess the risks of tremors and staff at more than 40 per cent, 62 reactors, lacked the standards to measure the risk of floods.

Equipment to measure and alert for possible earthquakes was found to be either insufficient or missing across 121 of the reactors.

Emergency operating procedures did not cover all reactor states from full power to shutdown in 57 reactors and 81 reactors did not store emergency equipment in readily accessible areas that would be protected from devastation.

France’s Nuclear Safety Authority expressed “reservations” about the Commission’s findings, saying that some of the conclusions ignored important recommendations found in the stress test final report.

The ASN also said it had already imposed improved safety requirement under extreme situations across its 58 nuclear reactors.

The Commission is encouraging all participants to quickly implement the stress test recommendations.

National action plans will be prepared by the end of the year and the Commission will also review European legislation for nuclear safety, suggesting necessary amendments by early 2013.