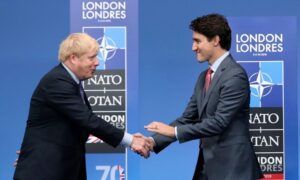 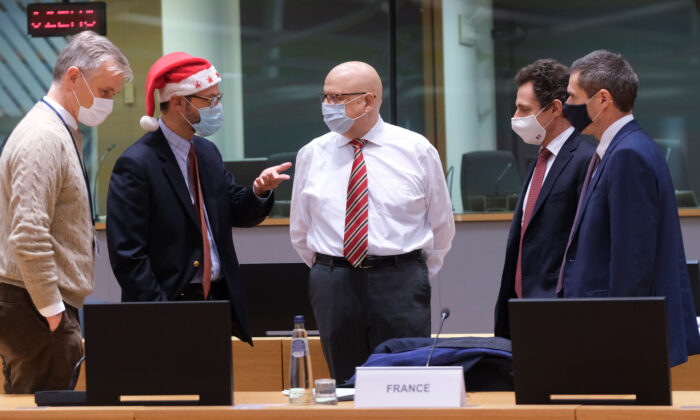 Ambassadors to The European Union speak as they gather ahead of a special meeting of The Committee of the Permanent Representatives of the Governments of the Member States to the European Union (Coreper) at the European Council in Brussels on Dec. 25, 2020. (Olivier Hoslet/Pool/AFP via Getty Images)
Europe

BRUSSELS—European Union ambassadors were convening on Christmas Day to start assessing the massive free-trade deal the bloc struck with Britain that should kick off next week when the Brexit process finally comes to an end.

After the deal was announced on Thursday, EU nations already showed support for the outcome and it was expected that they would unanimously back the agreement, a prerequisite for its legal approval.

Speedily approving the deal is essential, since a transition period during which Britain continued to trade by EU rules despite its Jan. 31 departure from the bloc runs out on New Year’s Day. Without a trade deal, it would have exacerbated chaos at the border where checks on goods will have to be increased since Britain is fully out of the 27-nation bloc.

The UK Parliament is expected to approve the deal in the coming days, but the agreement will have to be applied provisionally since the EU’s legislature can only give its consent next month at the earliest. There, too, approval is expected.

It took more than three years of wrangling before Britain left the bloc’s political structures last January. Disentangling the two sides’ economies and reconciling Britain’s desire for independence with the EU’s aim of preserving its unity took months longer.

Both sides now claim the 2,000-page agreement protects their cherished goals despite remaining concerns from fishermen.

Britain said it gives the UK control over its money, borders, laws, and fishing grounds. The EU says it protects the EU’s single market and contains safeguards to ensure that Britain does not unfairly undercut the bloc’s standards.

British Prime Minister Boris Johnson said on Thursday that the UK had agreed a “reasonable” five-and-half-year transition period with the EU over fisheries, longer than the three years Britain wanted but shorter than the 14 years the EU had originally asked for.

But Frederic Cuvillier, mayor of the French coastal city of Boulogne-sur-Mer, said the agreement left much obscured.

“Relief for our fishermen, but what will be the impact on stocks? Who, for example, will be handling the controls? And over what time?” he told Europe 1 radio.

“The only certainty today is that we need to find, during the transition period, more deals within the deal.”

Chesnais-Girard and Morin issued a joint statement welcoming the fact that a Brexit “no-deal” had been averted, but also calling for a meeting with French Prime Minister Jean Castex to analyze more of the details.

French fishermen had lobbied President Emmanuel Macron not to give an inch over fishing rights, but his government dropped initial demands to maintain the status quo.

French Seas Minister Annick Girardin issued a statement to say the government would set up financial measures to help French fishermen affected by the Brexit trade accord.

There has also been discontent across the Channel, with Britain’s fishing industry expressing disappointment that the deal did not represent more of a reduction in the access that the European bloc currently has to British waters.