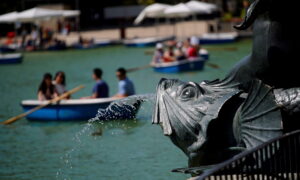 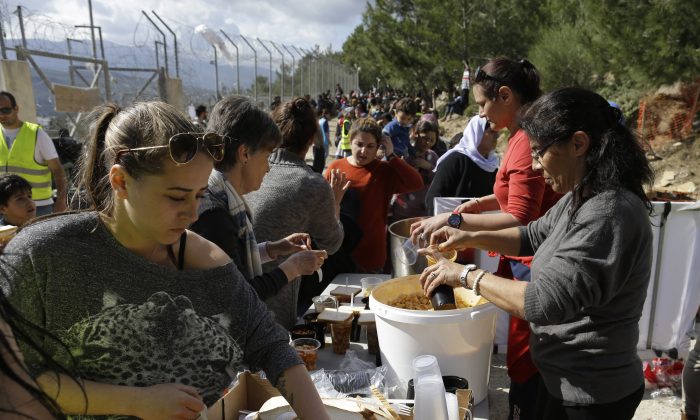 Volunteers serve food to migrants queuing outside the registration and hospitality centre, known as hotspot, of the eastern Greek Island of Samos, on the Aegean Sea,Thursday, March 3, 2016. (AP Photo/Lefteris Pitarakis)
Europe

ATHENS, Greece—Turkey is under growing pressure to consider a major escalation in migrant deportations from Greece, a top European Union official said Thursday, amid preparations for a highly anticipated summit of EU and Turkish leaders next week.

“To many in Europe, the most promising method seems to be a fast and large-scale mechanism to ship back irregular migrants arriving in Greece. It would effectively break the business model of the smugglers.”

Tusk was careful to single out illegal economic migrants for possible deportation, not asylum-seekers. And he wasn’t clear who would actually carry out the expulsions: Greece itself, EU border agency Frontex or even other organizations like NATO.

Greek officials said Thursday that nearly 32,000 migrants were stranded in the country following a decision by Austria and four ex-Yugolsav countries to drastically reduce the number of transiting migrants.

“We consider the (Macedonian) border to be closed … Letting 80 through a day is not significant,” Migration Minister Ioannis Mouzals said.

He said the army had built 10,000 additional places at temporary shelters since the border closures, with work underway on a further 15,000.

But a top U.N. official on migration warned that number of people stranded in Greece could quickly double.

Peter Sutherland said the “inevitable consequence” of closed borders throughout the Balkans “is that Greece increasingly becomes a camp for refugees and migrants.”

About a third of migrants trapped in Greece are at the village of Idomeni, on the border with Macedonia. Dwellers at a sprawling camp there hold out hope for crossing in increasingly difficult conditions.

Adnan Abdallah from Syria had waited to cross from Greece to Macedonia for three days, but when he finally was let through, he was turned back because the stamp on his refugee document is computer-generated.

“They say here (in Greece) everything is OK, but on the other side this is not acceptable,” he told The Associated Press.

The EU is struggling to hold its members to plans for a Europe-wide solution in dealing with the mass migration.

Hungary has already called a referendum on EU plans for a mandatory quota system for settling migrants, and says it’s was considering action to bolster its border fences with additional police and military personnel, and extending the fence to the Romanian frontier.

Earlier Thursday, Tusk told officials in Athens that Europe had little chance of resolving the crisis without full respect of controls on the external borders of Europe’s passport-free Schengen area—signaling pressure on Athens to do more to separate economic migrants from those fleeing war in Syria, Iraq and elsewhere.

He also had a direct message for them.

“I want to appeal to all potential illegal economic migrants, wherever you are from: Do not come to Europe,” Tusk said.

“Do not risk your lives and your money. It is all for nothing. Greece, or any other European country, will no longer be a transit country.”