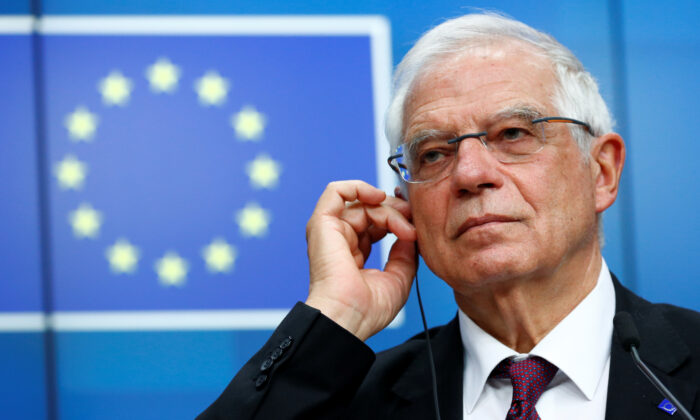 Josep Borrell, High Representative for Foreign Affairs and Security Policy and Vice-President of the European Commission holds a news conference after a European Union foreign ministers emergency meeting to discuss ways to try to save the Iran nuclear deal, in Brussels on Jan. 10, 2020. (Francois Lenoir/Reuters)
By Ella Kietlinska

The European Union Council of foreign ministers convened at an extraordinary meeting of the EU Foreign Council in Brussels on Jan. 10, calling on Iran to immediately go back to full compliance with the Nuclear Deal. It gave a mandate to the EU foreign policy chief Josep Borrell to carry out diplomatic efforts to resolve the tensions in the region via political means.

The EU’s High Representative Josep Borrell called this urgent meeting of European foreign affairs ministers, which was also joined by NATO Secretary-General Jens Stoltenberg,  after the assassination of an Iranian general, Qassem Soleimani, in a U.S. drone attack in Iraq on Jan. 3 and escalation of tensions in the region.

Stoltenberg said in his remarks before the meeting that NATO should build on some reduction in tensions in the Middle East that recently had been observed. However, “the fight against Daesh [ISIS terrorist group] is not over,” and ISIS can return despite the progress made to defeat it, said Stoltenberg.

The best strategy to defeat ISIS, according to Stoltenberg, is to train local forces in countering terrorism and build local defense and security institutions, which is currently happening in Iraq. However, NATO and the Coalition have suspended training activities due to security concerns, Stoltenberg said.

The ministers participating in the EU Foreign Council meeting assessed the consequences of the recent security incidents and the escalation of tensions in the region, as well as their impact on the activities carried out by the global coalition to defeat ISIS, according to the statement (pdf) adopted by the Council.

“The council gave a mandate to the EU’s High Representative to carry out diplomatic efforts with all parties to contribute to deescalation in the region, support political dialogue, and promote a political, regional solution,”  and called for “urgent deescalation and maximum restraint,” according to the statement.

Borrell said that the council did not consider triggering a dispute resolution process under the 2015 nuclear deal that could lead to renewed United Nations sanctions on Iran due to Iran’s decision to intensify its enrichment of uranium.

Instead, the ministers reiterated their support “for the preservation of the Joint Comprehensive Plan of Action (JCPoA) [Iran Nuclear Deal], as a key element of the global nuclear non-proliferation architecture,” and “called on Iran to go back to full compliance with the JCPoA without delay.”

Borrell had already offered for the Foreign Minister of Iran, Mohammad Javad Zarif, to coordinate the efforts of the remaining Nuclear Deal participants to complete the implementation of the deal, and invited Zarif to Brussels for further discussions.

The United States withdrew from the Iran nuclear deal in 2018 and reimposed tight sanctions on Iran previously lifted as a part of the deal.

Foreign ministers of the E3 countries (three Iran Nuclear deal signatories—France, Germany, and the UK) expressed their support for the deal.

German Foreign Minister Heiko Maas said before his arrival at the council meeting: “We are of the opinion that this agreement makes sense because it holds Iran to not developing nuclear weapons. … But of course, it only has a future if it is complied with, and we expect that from Iran.”

French Foreign Minister Jean-Yves Le Drian continued to insist the deal “is not dead” and said Iran could get access to atomic weapons within “one or two years” if it does abide by the agreement.

The U.S. State Department discussed with a NATO delegation how NATO could increase its involvement in Iraq in line with the President Donald Trump’s recommendation to Allies to increase burden sharing in “all defense efforts,” according to State Department spokesperson Morgan Ortagus.

The United States “military presence in Iraq is to continue the fight against ISIS, and as the Secretary has said, we are committed to protecting Americans, Iraqis, and our coalition partners,” Ortagus said in a statement.

“At this time, any delegation sent to Iraq would be dedicated to discussing how to best recommit to our strategic partnership—not to discuss troop withdrawal, but our right, appropriate force posture in the Middle East,” the statement said.