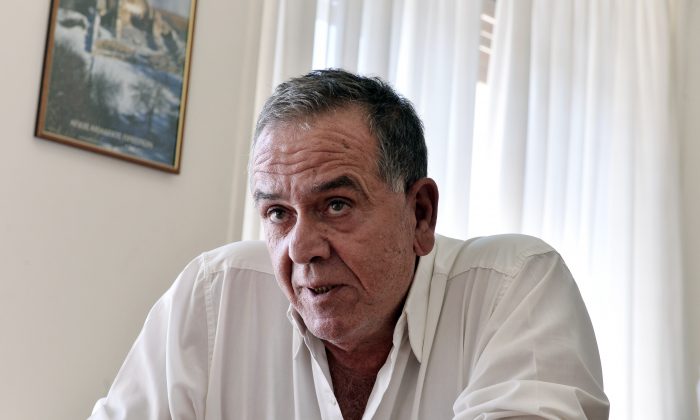 Greek Immigration Minister Ioannis Mouzalas at an interview with AFP at the Interior Ministry in Athens on Sept. 17, 2015. The distribution of the refugees at the 28 members is the only solution of the crisis with the massive influx, Mouzalas said. (Louisa Gouliamaki/AFP/Getty Images)
Europe

AMSTERDAM—European Union nations took a step Monday toward isolating Greece amid acrimony over Athens’ failure to stem the flow of migrants at its Mediterranean island borders.

Despite choppy seas and wintry conditions, more than 2,000 people are arriving in Greece daily, according to EU figures. Athens is under pressure to register and keep those coming in. Several EU nations have said that they could isolate Greece by closing off their borders so that incoming refugees would have to remain there.

The member states “gave a clear signal” that if they can’t stop the migrants reaching Greece, they would consider helping Greece’s neighbor Macedonia to better seal its border to slow the movement of migrants into other European countries, said Dutch State Secretary Klaas Dijkhoff.

Greek Immigration Minister Ioannis Mouzalas conceded his country was struggling to cope with the flow, but blamed EU member states for failing to provide enough manpower and boats to patrol Aegean Sea islands just a few kilometers (miles) from Turkey’s coast and not honoring pledges to relocate migrants.

Mouzalas told reporters Athens wanted 1,800 officers from the EU border patrol force known as Frontex, but got only 800. Of the 28 coast guard ships requested by Greece, only six have arrived, he added.

Mouzalas called the idea of sending Frontex officers to the Greek-Macedonian border to halt migrants there “illegal” and insisted more Frontex officers should be sent to his country instead.

Ministers arriving for the meeting at Amsterdam’s Maritime Museum were met by protesters in two boats, one full of showroom dummies wearing red life vests similar to those worn by migrants crossing from Turkey and another with a large sign saying: “Leaders of Europe, it’s not the polls you should worry about. It’s the history books.”

The meeting comes only days after European Council President Donald Tusk warned that Europe’s passport-free travel area, known as Schengen, could break apart if the migrant strategy isn’t sorted out within two months.

Meanwhile in Brussels, Denmark’s foreign and immigration ministers sought to ease tensions over government plans to seize some of the assets of asylum-seekers to pay for their food and lodging.

Under the plan, people would be allowed to keep 1,300 euros ($1,400). Any assets or cash beyond that amount could be taken unless the items hold sentimental value, like wedding rings.

“Those people who can manage by themselves shouldn’t have assistance from the state,” Migration Minister Inger Stoejberg told EU lawmakers.

The new plan, which has been criticized by rights and refugee groups as well as migrants themselves, is to be debated in the Danish parliament on Tuesday.

Denmark received 21,300 asylum-seekers, one of the highest rates per capita in the EU, last year, and has introduced tougher border controls until at least early next month.

European Commissioner Frans Timmermans told Dutch broadcaster NOS on Monday that 60 percent of migrants entering Europe are “from countries that you can assume they have no right to asylum.” He said such “economic migrants” should be sent home more quickly, to ease pressure.