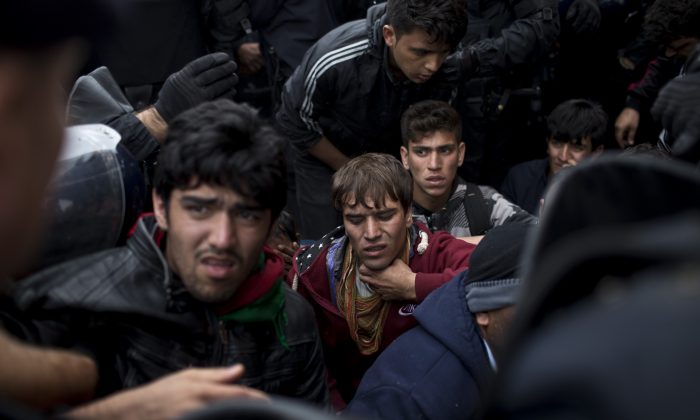 BRUSSELS—Deeply divided European Union ministers agreed Tuesday to relocate 120,000 asylum-seekers to ease the strain on Greece and Italy, which are on the front line of the migrant flood. But a senior European leader conceded that the move was only a small step toward resolving one of the worst crises ever faced by the 28-nation bloc.

Four eastern European countries—the Czech Republic, Slovakia, Romania, and Hungary—voted against the plan, and it’s unclear if they will even implement it.

Those nations have resisted accepting the forced resettlement of refugees on their territory.

Slovakia would rather breach the measure “than accept such a dictate,” said Prime Minster Robert Fico.

His Czech counterpart, Bohuslav Sobotka, added: “It’s a bad decision, and the Czech Republic did all it could to block it.”

EU leaders will gather Wednesday evening in Brussels to try to adopt a unified approach to the crisis that has seen 477,906 people stream into Europe from the Middle East, Africa, and Asia, according to estimates by the U.N. refugee agency. Some European countries have reinstated border controls to stem the flood, and Hungary has built a fence topped with razor wire on its frontier with Serbia.

EU Commission First Vice President Frans Timmermans insisted that all member states “respect the outcome” of the relocation plan, which he said showed that the bloc is “capable of taking decisions even if, for some member states, these are very difficult decisions.”

But even Timmermans conceded it was only a small step, and plenty more remains to be done.

The office of the U.N. High Commissioner for Refugees urged the EU to quickly set up facilities in Greece, where tens of thousands have arrived after making the hazardous sea crossing from Turkey.

This may be “the last opportunity for a coherent European response,” said Melissa Fleming, a spokeswoman for the UNHCR.

Tuesday’s deal did not set mandatory quotas for each nation—one of the most contentious aspects of the proposed plan. It said that 66,000 asylum-seekers will be relocated from Greece and Italy, and 54,000 more in a year’s time.

Amnesty International’s Europe director, John Dalhuisen, cautioned that agreed-upon numbers “are still too low, given the immensity of the current crisis.”

At long last, this is a step in the right direction, but EU leaders need to be looking ten steps ahead, not one.
— John Dalhuisen, Europe director, Amnesty International

“At long last, this is a step in the right direction, but EU leaders need to be looking ten steps ahead, not one,” he said.

Timmermans said the EU has to do a better job of protecting its borders, registering arriving migrants, quickly returning those ineligible for asylum, and “providing hope and perspective” for those in conflict-torn countries.

“Maybe something will change,” said Romanian Prime Minister Victor Ponta, who hoped that his country won’t be obliged to take in more than the 1,785 refugees it has offered to absorb. The Romanian news agency reported that the country would have to take an extra 2,475 refugees.

German Interior Minister Thomas de Maizière, whose country is absorbing most of those pouring into Europe, said Germany would take more than 30,000 of the 120,000 asylum seekers.

“We are doing this out of solidarity and responsibility, but also in our own interest,” he said. “At the moment, something like 50 percent of those who are arriving in Greece are coming to Germany. With a quota of 26 percent, fewer of this group would come.”

De Maizière said the deal also aims to cut “secondary migration,” in which those seeking asylum move from one European country to another.

Along the migrant trail through the Balkans in southeastern Europe, the crisis continued and drew old foes into a new dispute.

Serbia gave Croatia an ultimatum to reopen its border, threatening unspecified countermeasures. Croatia shut all but one of its crossings with Serbia last week to block the migrant influx, which has reached 34,900 in just a few days. But the action has crippled the economy in Serbia, a conduit for cargo across Croatia to Europe.

Croatia started letting trucks carrying food from Serbia across the border on Tuesday afternoon, but Serbian Prime Minister Aleksandar Vucic said that was not enough, adding that all cargo traffic must be restored.

Vucic had called an emergency session of all security services, including the military, to discuss the crisis. The two nations have a tense history after fighting each other in the Balkan wars of the 1990s.

“This is a scandal of international proportions,” Vucic said. “Croatia has breached all European agreements and directives.”

Croatia was angry by Serbia’s busing migrants to its border.

“Mix it up a little,” Croatian Prime Minister Zoran Milanovic said. “Send them a bit to Hungary and Romania.”

“We have nothing. No water, no food, no shelter. We are living in tents, we need help,” said Mohamed Saber Nazari, a 20-year-old Afghan. “You see all the families living in the rain, with small children? Something must be organized for us.”

A 45-year-old taxi driver sympathized with their plight. More than 20 years ago, Adrian Mustafa had walked from Albania to Greece, where he has been living ever since.

“If you go through what these people are going through, only then will you understand,” he said. “They don’t want to stay here, but they live under bad conditions.”