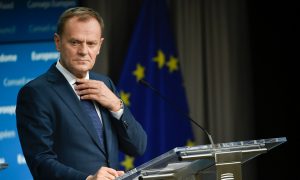 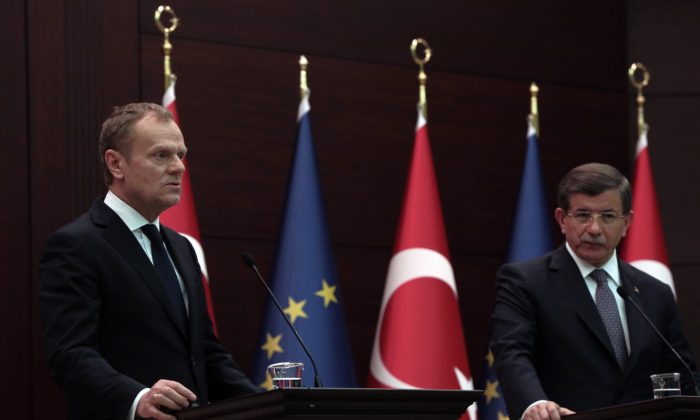 Turkey's Prime Minister Ahmet Davutoglu (R) and European Council President Donald Tusk at a joint press conference in Ankara, Turkey, on March 3, 2016. Tusk says it is up to Turkey to decide what further measures it can take to reduce the flow of migrants but says many in Europe favor a mechanism that would allow the “fast and large-scale” shipment of migrants back to Turkey and such a mechanism would “effectively break the business model of the smugglers. (AP Photo/Burhan Ozbilici)
Europe

EU Looks to Refugee-Laden Turkey to Ease Its Migrant Burden

BRUSSELS—European Union leaders will look to persuade Turkey’s prime minister at a summit on Monday to slow the flow of migrants traveling to Europe and take back thousands who do not qualify for asylum.

Ankara is central to easing Europe’s refugee pressures. More than 2,000 people arrive daily from Turkey to Greece, where many have been stranded as countries on the main migrant route through the Balkans are aiming to stop them moving north.

“The number of illegal entries from Turkey to Greece remains far too high,” summit chairman, EU Council President Donald Tusk, wrote in an invitation letter to the leaders.

Tusk said that he and Turkish Prime Minister Ahmet Davutoglu “believe that we can reduce the flow through large-scale and rapid return from Greece of all migrants not in need of international protection.”

The EU has offered several sweeteners to get the Turkish authorities to crack down on migrant movements. Some 3 billion euros ($3.3 billion) will be made available for Syrian refugees. Turkey’s long-coveted EU membership process is being sped up, as are moves to ease EU visa requirements. Summit meetings like these are also part of the package.

Ambassadors will meet late Sunday to prepare a draft text ahead of the meeting Monday. The EU’s executive Commission has already trumpeted the availability of tens of millions of euros to help Syrian school children and provide food aid. It said that a new “road map” on visa liberalization for Turkey had also been submitted.

However, Turkey has a huge migrant challenge of its own, as host to more than 2 million people who fled the conflict in Syria, and the returns on the European investments have been limited so far. Many complain that still far too many people cross the Aegean Sea from Turkey to Greece, adding to the 850,000 people who entered Greece that way last year.

The United Nations’ refugee agency called on Friday for 400,000 Syrians in Turkey to be resettled around the world to ease the country’s burden. So far it remains to be seen if any countries are willing to offer their assistance. Only 7,500 people were resettled in 2015.

After regular calls for Ankara to do more, the Commission announced on Tuesday that Greece was finally in the process of returning 308 migrants not in need of international protection to Turkey.

NATO is helping too. A small flotilla of ships is in the Aegean Sea to ease the load on the military-run Turkish coastguard.

The summit, the second of three in Brussels in just over a month, comes just days after a Turkish court ordered the seizure of the opposition Zaman newspaper. The move has heightened fears over deteriorating media freedom in the country and led to calls for action from the international community, but they will most likely be brushed aside at the high-stakes talks.

Instead, the meeting will see fresh appeals for unity and for countries to implement several migrant policy measures they’ve already agreed to.

Many of the preferred destinations for migrants, like Germany and Scandinavia, have reintroduced border controls, threatening the future of the Schengen passport-free area so vital to trade and travel. Croatia signaled Friday that it’s ready to deploy the army.

In the Balkans, Slovenia, Croatia and Hungary—with support from Austria—have encouraged Macedonia to squeeze its border with Greece, allowing only a trickle of people onto its territory.

Afghan nationals, who may qualify for asylum, have been locked out. Ahead of the summit, between 13,000 and 14,000 were camped at the Greek-Macedonia border, clinging to the hope that they might be allowed to move north.

Ravaged by a massive debt crisis, Greece has neither the resources nor the capacity to process and shelter people. Yet experts say those figures are nothing next to countries like Turkey, or Lebanon and Jordan, however desperate Europe might be to get them to do more.

“Other countries in the world are able to manage those numbers,” UNHCR Europe bureau director Vincent Cochetel said Friday. “We don’t see why the European Union would not be able to manage.”