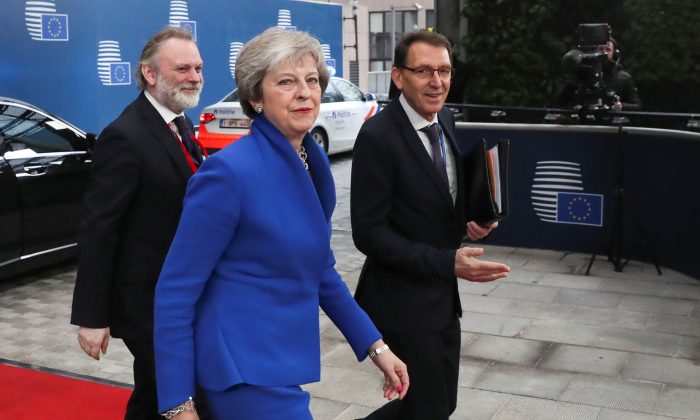 Britain's Prime Minister Theresa May arrives with Britain's Permanent Representative to the EU Tim Barrow at an extraordinary EU leaders summit to finalise and formalise the Brexit agreement in Brussels, Belgium, on Nov. 25, 2018. (Yves Herman/Pool/Reuters)
Europe

European Union leaders gave the nod to a Brexit deal at a summit in Brussels on Nov. 25, in a landmark decision that brings Britain’s formal exit from the bloc a crucial step closer.

President of the European Council Donald Tusk announced in a tweet that a deal had been hammered out.

EU27 has endorsed the Withdrawal Agreement and Political Declaration on the future EU-UK relations.

The agreement comes after over 18 months of grueling negotiations that began when the UK triggered the Article 50 withdrawal process in a 2016 referendum vote that the “Leave” side won by a margin of 51.89 percent to  48.11 percent.

Leaders of 27 EU member states took less than an hour to rubber-stamp the 600-page treaty for Britain’s withdrawal and the 26-page declaration outlining future trade relations between the UK and the bloc.

The main text of the political declaration (pdf) said the EU and Britain “agree to develop an ambitious, wide-ranging, and balanced economic partnership.

“This partnership will be comprehensive, encompassing a free trade area as well as wider sectoral cooperation … will be underpinned by provisions ensuring a level playing field.”

British Prime Minister Theresa May now must persuade UK lawmakers to approve the deal. Many British members of Parliament have been vocal about their opposition.

“This is the deal,” Juncker told reporters on his way into the meeting, and expressed hope that May would manage to convince British lawmakers to sign off.

“I believe that the British government will succeed in securing the backing of the British Parliament,” Juncker said, and added that the EU would not be prepared to offer any further major concessions. “I would vote in favor of this deal because this is the best deal possible for Britain,” he added.

On Saturday, Tusk signaled that the deal would most likely be approved after Spain withdrew last-minute concerns over Gibraltar.

Spanish Prime Minister Pedro Sánchez threatened to boycott Sunday’s meeting if he did not get amendments to the deal to ensure Madrid gets a say in Gibraltar’s future ties with the EU.

After officials wrangled through the night, he announced on Saturday afternoon that he had such written pledges. Brussels officials said those essentially confirmed what most EU leaders had already understood—that Spain must have a binding say over how any future EU-UK trade pact might affect Gibraltar.

“Now it is time for everybody to take responsibility—everybody,” said Michel Barnier, the chief negotiator on the EU side, responsible for grinding out the withdrawal treaty over the past 18 months.

Barnier called the package a basis for close future ties, insisting, “We will remain allies, partners, and friends.”

Dutch Prime Minister Mark Rutte, whose country is one of Britain’s closest trading partners, praised May’s handling of the difficult negotiations and said he was confident that she could see the deal through Parliament in the coming weeks.

But he also had a warning for those in May’s Conservative party as well as the Labour opposition who argue that a better deal can still be done before Britain leaves in four months if lawmakers deny her minority government support on Brexit.

“This is the maximum we can all do,” Rutte said, shaking his head when asked if the EU might make more concessions.

Saying the EU “hates” Brexit, Rutte said, “Nobody’s winning—we are all losing.” But, he said, the deal was an acceptable compromise for all that gave May a chance to clinch a solution.

Anticipating a challenging road for May to secure parliamentary approval, Tusk tweeted, “But regardless of how it will end, one thing is certain: we will remain friends until the end of days, and one day longer.”

Ahead of us is the difficult process of ratification as well as further negotiations. But regardless of how it will end, one thing is certain: we will remain friends until the end of days, and one day longer. #Brexit

‘Get on With Brexit’

In a “letter to the nation” released Sunday, May said she would be “campaigning with my heart and soul to win that vote and to deliver this Brexit deal, for the good of our United Kingdom and all of our people.”

“It will be a deal that is in our national interest—one that works for our whole country and all of our people, whether you voted ‘Leave’ or ‘Remain,'” she said.

May reiterated that promise in Sunday’s statement, saying, “We will take back control of our borders, by putting an end to the free movement of people once and for all.

“Instead of an immigration system based on where a person comes from, we will build one based on the skills and talents a person has to offer.”

The prime minister said the agreement would allow trade to flow with minimal disruption.

“A free trade area will allow goods to flow easily across our borders, protecting the many skilled jobs right across the country that rely on integrated supply-chains,” she said.

She said Britain’s departure from the EU “must mark the point when we put aside the labels of ‘Leave’ and ‘Remain’ for good and we come together again as one people.”

“To do that we need to get on with Brexit now by getting behind this deal,” she added.

British lawmakers are expected to vote on the deal in early December.