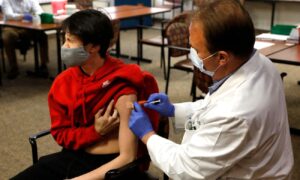 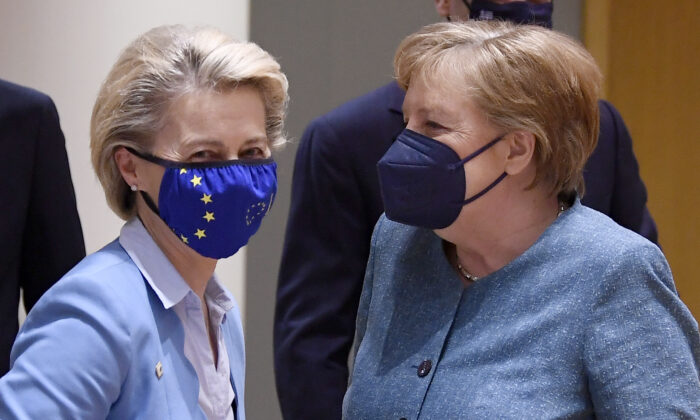 German Chancellor Angela Merkel (R) speaks with European Commission President Ursula von der Leyen during a round table meeting at an EU summit in Brussels, on May 25, 2021. (John Thys/Pool via AP)
Europe

BRUSSELS—EU leaders agreed Tuesday to donate at least 100 million doses of COVID-19 vaccines to poorer nations by the end of the year as supplies steadily rise across Europe.

Gathered in Brussels for a two-day summit, the 27 leaders backed a text in which they pledge to continue efforts “to increase global vaccine production capacities in order to meet global needs.”

The program suffered a major setback last week when its biggest supplier, the Serum Institute of India, announced it would likely not export any more vaccines until the end of the year due to the COVID-19 crisis on the subcontinent.

Leaders acknowledged that vaccination has finally picked up across their continent following a painfully slow start compared with the successful drives in the United States, Britain, and Israel. European Commission president Ursula von der Leyen presented data to the leaders suggesting that 300 million doses will have been delivered in the region by the end of May, with about 46 percent of the adult population in the bloc of 450 million getting at least a first dose of vaccine.

But as vaccination campaigns continue to progress in the Western world, poorer countries are struggling to acquire supplies. During a health summit in Rome last week, Italian Premier Mario Draghi said that nearly 1.5 billion vaccine doses have been administered in over 180 countries worldwide. Yet only 0.3 percent were in low-income countries, while richer countries administered around 85 percent.

In addition to the donation of shots, leaders pledged to help countries in need to develop vaccine production locally.

It was unclear which vaccines from the EU’s portfolio would be donated. Coronavirus vaccines authorized by the European Medicines Agency, the bloc’s drug regulator, include Pfizer, Moderna, AstraZeneca, and Johnson & Johnson.

The agreement came after the United States said earlier this month it will share an additional 20 million doses of COVID-19 vaccines with the world on top of a prior commitment to share about 60 million doses of the AstraZeneca vaccine.

Leaders also welcomed the compromise found last week with European Union legislators for launching COVID-19 certificates before the height of the summer holiday season, a move aimed at boosting travel and tourism following the restrictions of the coronavirus pandemic.

The EU plans to have the trans-border passes up and running by July 1. They will be delivered to EU residents who can prove they have been vaccinated, as well as those who tested negative for the virus or have proof they recovered from COVID-19, and should serve to avoid quarantines and more testing upon arrival.