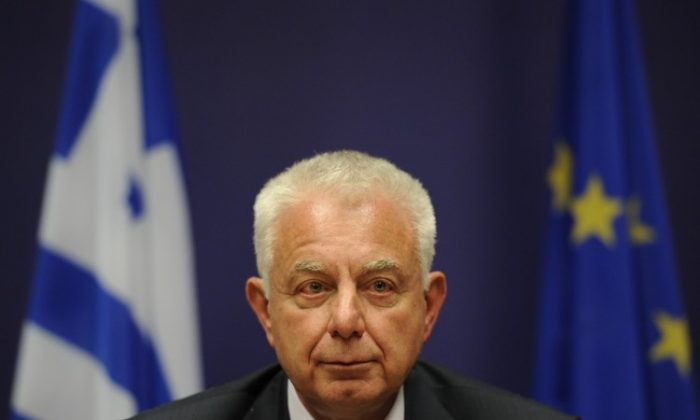 Caretaker Greek Prime Minister Panagiotis Pikrammenos speaks during a press conference after a meeting of European Union leaders in Brussels early on May 24, 2012. (John Thys/AFP/GettyImages)
Business

EU Knew Greece Cooked its Books When it Joined Eurozone

Suspect statistics from Greece were overlooked by European Union officials when negotiating Greece’s entry for the single currency in 2002, according to The Federation of European Employers (FedEE).

A statement by the think tank servicing multinational companies operating in Europe questions who is to blame for taxpayers around the world having to pay 240 billion euros for the blunder.

The FedEE dusted off an EU report published in November 2004 by the EU statistics office (Eurostat) in Luxembourg. “This report charts the frustrated efforts of EU statisticians over an 8-year period to persuade the Greek government to provide honest and accurate statistics,” writes the FedEE.

Questions were first raised about the accuracy of Greece’s debt assumptions during meetings on February 8–9, 2006, according to the statement.

“Inconsistencies in the interpretation of capital transfers as a counterpart to various items of debt assumptions” were pointed out in a letter by the director general of Eurostat to the National Statistical Service of Greece. The letter went on to say that “Eurostat could not agree with the exclusion of the counterpart transaction from the net borrowing requirement of the General Government Sector”.

From that time, the Greek Statistical Service would apparently conform to EU requests, but later falsify the figures. In 1997, the EU instructed that “these corrections should be done immediately” and “In spite of this conclusion, Greece did not revise its figures and did not transmit a revised notification,” the records showed.

The FedEE statement said that it would have been well known by EU officials and politicians that the statistics on government debt that Greece provided for the requirements of entry into the euro, in November 2000, could not be trusted.

The pattern of number fudging repeated itself with disastrous results in 2009. In October that year, just after Greece’s new finance minister, George Papakonstantinou, took office he announced that the government debt was three times higher than his predecessors had let on—12.8 per cent instead of 3.6 per cent. Six months later, further calculations put the debt at a staggering 13.6 per cent.

These figures set off the international alarm bells about Greece’s fiscal situation.

In January 2010, Eurostat stated that it would no longer trust data from Athens after seeing irregularities five times between 2005 and 2009.

“Even the new Greek prime minister, George Papandreou, referred to the National Statistical Service of Greece as a ‘joke’,” said Kevin Featherstone, professor at the London School of Economics and director of the Hellenic Observatory in the European Institute, at a lecture in June 2010.

The statistics agency was subsequently made independent of the government as a condition of the bail-out package in 2010.

The secretary-general of the FedEE, Robin Chater, wanted to know why no one has been held responsible for allowing Greece to join the eurozone in the first place.

“Although politicians are quick to point the finger at corporate misdoings they are strangely silent when it is politician themselves—and their officials—that are in error,” said Chater in the statement.

Chater says two individuals are most to blame: Jacques Delors, former president of the European Commission, who laid the foundation for the European single market; and his successor Jacques Santer, who now heads the Special Purpose Investment Vehicle (SPIV), a mechanism formed to fund bailouts through the eurozone rescue fund.

“Another case of putting the poacher in charge of the pheasants,” says Chater.