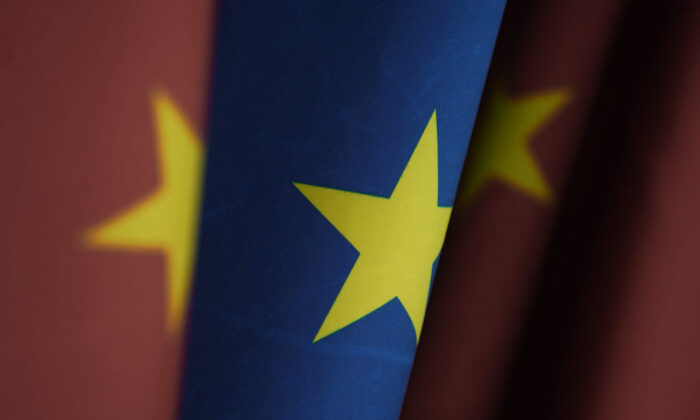 Flags of communist China and the European Union stand at the Chancellery in Berlin, Germany, on Jan. 26, 2021. (Sean Gallup/Getty Images)
Europe-China Relations

On Wednesday, the European Commission considers a new strategy to assert its interests amid increasingly politicized trade disputes with China and the United States, as it prepares to face off against China over a diplomatic dispute arising with the Republic of Lithuania.

In recent years, the EU has been vulnerable to economic coercion from larger powers due to its multipolar design and the difficulty of establishing consensus among all member states. Previously, it has been difficult for EU policymakers to acquire the unanimous approval needed to retaliate against economic blackmail. Even when EU member states are in consensus about a given issue, a collective action problem emerges in which member states tie their approval of given measures to unrelated national objectives, such as last year when Cyprus attempted to tie its approval of EU sanctions on Belarus to actions against Turkey.

The new proposal will lower the bar to allow the European Commission to impose sanctions on non-member states, allowing the community of nations to act decisively in the face of economic aggression by non-members.

“When a non-EU state puts pressure on an EU company in order to influence EU Policy, [t]his instrument helps to deter that coercion,” the European Commission posted to Twitter on Wednesday. “The goal is to counter and repel such foreign pressure, to further business and trade, and to secure jobs all over the EU.”

The anti-coercion instrument is likely to see its first test this week, as the Chinese government blocks trade to Lithuania for the Eastern European country’s diplomatic gestures toward Taiwan, also called the Republic of China. Beijing views Taiwan as a breakaway province, and Taiwan says it is an defacto independent and self-ruled island in its own right.

China responded to the announcement of this new development by withdrawing its ambassador from Vilnius and imposing severe sanctions on the Baltic state, suspending freight trains to Vilnius and halting the approval of export permits for Lithuanian producers.

While China is the obvious target of the new trade weapon, some EU policymakers are enthusiastic to use it to assert European interests against the United States. During the American negotiations with Iran to restore the terms of the Iran nuclear deal, many European policymakers were frustrated by their perceived omission from the process. Some advocate for using this diplomatic tool to retaliate against American tactics in diplomacy and trade. However, this approach is controversial, with Atlanticists in the EU seeking closer ties with the United States and the United Kingdom.

This new tool has been criticized by some Europeans because the proposal significantly lowers the bar to allow EU negotiators to act unilaterally without explicit consent of all member nations, so it is likely to upset leaders in those nations seeking closer ties to the Chinese Communist Party. If tensions escalate to a full-scale trade war, the new tool is likely to face opposition from Europeans unenthusiastic about being dragged into an economic battle with a world power on behalf of a small Baltic nation with fewer than three million people. Additionally, Japan has warned the EU to reconsider the measure, likely on account of the fragility of its own efforts to thwart Chinese regional hegemony.

Despite these controversies, the new proposal has immense potential to reshape the EU’s multilateral negotiations with its economic rivals. As Brussels prepares to face off with Beijing over the conflict with Lithuania, the new diplomatic weapon may not have long to wait before it is used.