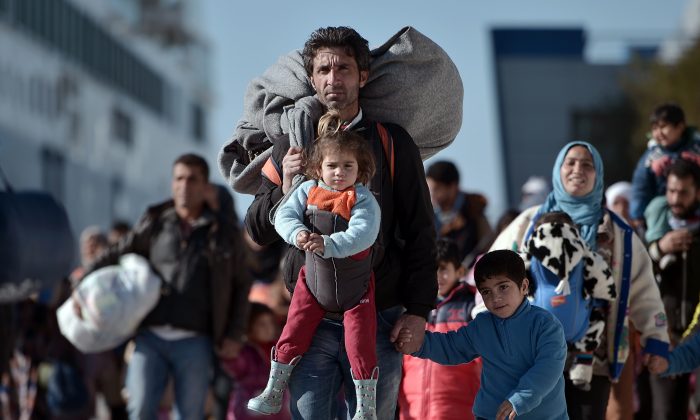 Thousands of migrants and refugees walk through the port of Piraeus after arriving from the Greek islands of Lesbos and Chios on Feb. 1, 2016. (Louisa Gouliamaki/AFP/Getty Images)
Europe

EU Increases Aid to Migrants in Greece Ahead of Winter

THESSALONIKI, Greece—The European Union will add 115 million euros ($129 million) in funding to humanitarian organizations in Greece to assist programs for refugees and migrants before the winter, officials said Saturday.

The money would be used to support refugee schooling, food stamps, heating and living facilities for unaccompanied minors, said Christos Stylianides, the European Commissioner for Humanitarian Aid and Crisis Management.

“We have to respond to the needs of migrants in the EU. Most of these people risked their lives and traveled in a plastic boat to get here. We are providing help to improve the conditions they are facing,” he said.

About 60,000 refugees and migrants are stranded in Greece due to European border closures.

The EU money was pledged a day after U.S.-based Human Rights Watch strongly criticized the government for continuing to use police cells to house unaccompanied migrant children.

Ioannis Mouzalas, a Greek minister for migration, said the government was working on building more permanent structures at camps to replace tents.

“We have said repeatedly that many of the facilities we have are not good quality and we are working to improve that,” he said, adding that it would take several months to create new facilities for children who traveled to Greece without adult relatives.

New shelter space on the mainland will also help reduce overcrowding at camps on Greek islands where several violent protests have occurred in recent weeks.

Under a deal between the EU and Turkey, migrants who arrived on the islands after March 20 are being held for deportation back to Turkey if their asylum claims are rejected.

The rights group Amnesty International on Saturday renewed its criticism of the EU-Turkey agreement after a Syrian asylum seeker had his claim rejected by a government appeals board in Greece.

“This ruling takes for granted that a Syrian will be fully protected in Turkey, and hence is fundamentally flawed,” Amnesty’s John Dalhuisen said in a statement emailed to the Associated Press.

“The idea that Turkey fully respects the rights of asylum seekers is a fiction.”