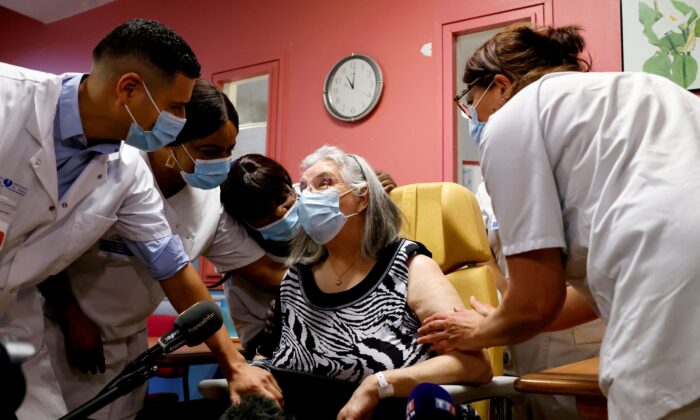 Health workers speak with Mauricette, a 78-year-old French woman, after she received the first dose of the Pfizer-BioNTech COVID-19 vaccine in the country, at the Rene-Muret hospital in Sevran, on the outskirts of Paris, France, on Dec. 27, 2020. (Thomas Samson/Pool via Reuters)
Europe

The European Union’s drug regulator said it is now evaluating whether to recommend COVID-19 booster shots, according to a statement posted Monday.

The European Medicines Agency (EMA) said it’s evaluating the use of another dose for the vaccine to be given six months after the second dose among individuals aged 16 and older.

“Additional doses should already be considered for people with severely weakened immune systems as part of their primary vaccination,” said the agency in a statement, asserting that the vaccines provide protection against hospitalization and death.

The agency did not say whether the booster dose would be effective at preventing transmission of COVID-19. Studies published by the U.S. Centers for Disease Control and Prevention (CDC) published last month revealed that vaccines may not prevent transmission of the virus.

“It is important to distinguish between booster doses for people with normal immune systems and additional doses for those with weakened immune systems,” the EMA added. “Some studies report that an additional vaccine dose can improve the immune response in immunocompromised individuals, such as organ transplant recipients whose initial responses to vaccination were low. In such cases, the option of administering an additional dose should be considered already now.”

And now, the EU regulator said it will work on providing a booster to “older” and “frail” individuals, namely those living in long-term care facilities and nursing homes.

Should boosters be rolled out en mass across Europe, it is sure to prompt criticism from the World Health Organization (WHO), which has frequently called on the EU and the United States to place a moratorium on developing booster shots in favor of providing COVID-19 vaccines for poorer nations.

In the United States, federal health officials in August said they’ve targeted Sept. 20 as the date to roll out boosters for most Americans.

During an update on Sunday, Biden administration COVID-19 adviser Anthony Fauci said that the Food and Drug Administration (FDA) will most likely approve boosters made by Pfizer, then Moderna, before Sept. 20.

“We were hoping that we would get the, both the candidates, both products, Moderna and Pfizer, rolled out by the week of the 20th. It is conceivable that we will only have one of them out, but the other would likely follow soon thereafter,” Fauci said on Sunday in a CBS News interview.

Pfizer, he said, has submitted its data already and “likely would meet the deadline.” After that, Moderna’s booster would likely be approved by the FDA. He made no mention of the Johnson & Johnson COVID-19 vaccine, which uses an adenovirus rather than mRNA technology.