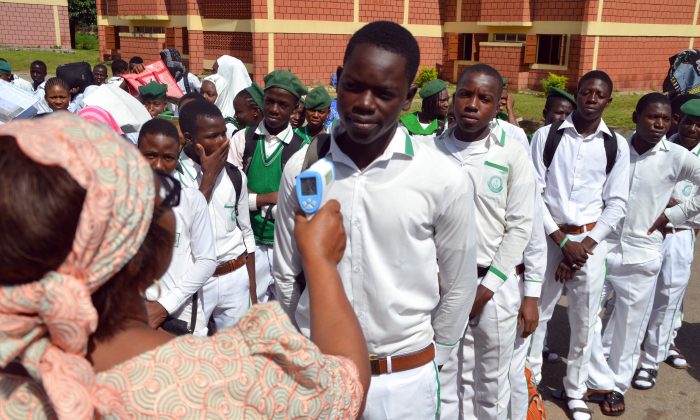 BRUSSELS— On Tuesday, European politicians and NGOs discussed ways to combat the Ebola epidemic that has swept West Africa.

The European Union has pledged to contribute financially, but the deployment of doctors, which is sorely needed, is delayed because of a lack of evacuation procedures. Ebola is highly contagious and doctors working in highly protective conditions still get infected.

“We need to recruit doctors, nurses, and help people to go there and help, but they won’t go unless the evacuation service is in place. So that’s the top priority,” said Linda McAvan, a member of the European Parliament.

She said she wanted EU governments to sit down this week and figure out who is going to provide medical evacuation facilities for medical workers.

The European Parliament adopted a resolution, which McAvan co-authored, on the EU’s response to Ebola on Sept. 17. It calls for the EU to step up its response to the quickly spreading disease and encourages EU member states to lend more financial support.

The U.S. Centers for Disease Control and Prevention released a new report on Tuesday with projections of as many as a 1.4 million being infected with the Ebola virus by Jan. 20, 2015, and 21,000 by the end of September 2014.

“And that’s if we do something. If we don’t do anything, it can be much-much worse,” said McAvan.

So far over 2,630 people have died from the disease, mostly in West African countries like Liberia, Sierra Leon, and Guinea.

According to the CDC report, the number of cases being reported is doubling every 15–20 days in Liberia and every 30–40 days in Sierra Leone.

While there is yet no cure for the disease, infected patients need to be isolated in medical centers to assist their immune system in fighting the disease, and to prevent it from spreading to others.

“You are continuing to get a high number of new cases and … there are not enough hospitals to treat patients,” said Christopher Stokes, general director of Doctors Without Borders. “Because they can’t be isolated and treated, when they go back to their communities, they then infect people who are taking care of them.”

In Sierra Leone, the government instituted a drastic, three-day lockdown of the country’s 6 million residents that finished on Sunday. The lockdown, which was declared a success, was to educate the public and uncover new cases of the virus.

Ibrahim Sorie, the Sierra Leone ambassador to the European Union, said people are past the stage of denial now and are more willing to report Ebola cases.

“The way the message was packaged, made people very fearful. … But now that the message has been repackaged that having Ebola is not an immediate death sentence, that Ebola is curable, and it can also be prevented, there is a resurgence of hope,” he said.