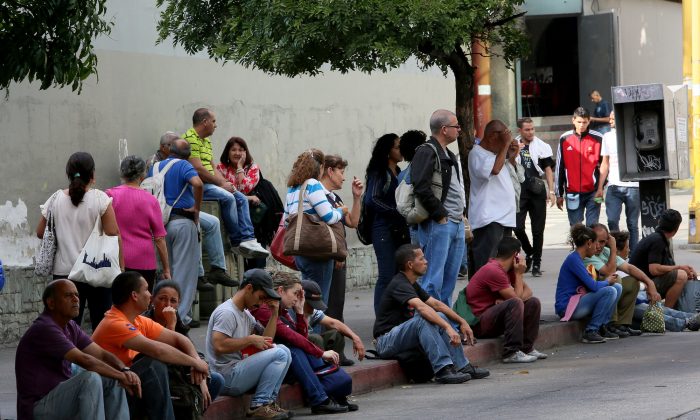 People line up to take the bus due to a collapse in the public transport system in Caracas, Venezuela, on Jan. 31, 2019. (Edilzon Gamez/Getty Images)
Europe

BRUSSELS—The European Union has decided to continue diplomatic efforts to bring about a regime change in Venezuela despite the denied entry of a group of parliamentarians to Venezuela as a contact group of aid observers.

The 28 member states agreed at a meeting Feb. 18 to stand behind an international contact group amid outrage over Maduro’s decision to ban a delegation of EU parliamentarians from entering the country.

A group of four MEPs from the center-right European People’s Party (EPP) had been invited to Caracas by the opposition-led Parliament to observe how EU-funded medical aid was reaching people in need.

However, they were refused entry at the Caracas airport and officials put them on the first flight back to Madrid after Maduro’s foreign minister, Jorge Arreaza, accused the group of “conspiring” against the government.

Spanish MEP Esteban Gonzalez Pons, who was part of the delegation and is head of the EPP, called for the EU to leave the contact group, which also includes a number of Latin American nations, and recall all its diplomats from Venezuela.

Dutch MEP Esther de Lange, who was also with the group, warned Caracas there will “undoubtedly be consequences” for its decision in a video she posted on social media from the airport lounge.

“It’s a real shame, because we weren’t here to provoke,” de Lange said. “We came here to see how medical help was getting to people on the ground and to plea for humanitarian aid to be allowed into the country for those who are suffering most from this situation.”

German MEP Manfred Weber, a leading candidate to be the next Commission president, insisted it was time for the EU to recognize president of the Venezuelan National Assembly Juan Guaidó as the country’s legitimate leader. The United States, along with a host of other nations in Europe and others, have recognized Guaidó as Venezuela’s interim president.

“The Maduro regime is scared of what foreign observers will see,” Weber said. “He is denying people food and freedom. I expect the EU to act immediately and recognize Juan Guaidó as the legitimate president of the country.”

Guy Verhofstadt, leader of the pan-European liberal group the Alliance of Liberals and Democrats for Europe, added: “The barring of directly elected EU representatives from Venezuela is unacceptable. It is yet another sign that Maduro obstructs any dialogue which could show a path out of the current crisis.”

However the bloc’s high representative for foreign affairs, Federica Mogherini, said foreign ministers from the member states agreed at a meeting in Brussels that diplomatic efforts to resolve the crisis are “crucial.”

“During the meeting with the ministers we discussed the case and expressed our common regret. We have not discussed the possibility of the EU interrupting the work of the international contact group,” Mogherini said.

Speaking about the Venezuelan regime’s decision to bar the group of MEPs, she added: “I regret the fact that they were not allowed to enter the country. It would have been good for them to have the possibility to have talks.”

The international contact group held its first meeting in Montevideo at the start of the month. At the talks, the EU and Uruguay had agreed to sent a “technical mission” to Caracas, which will arrive later this week.

Brussels has called for Maduro to stand down and call fresh elections. However, EU’s attempts to exert pressure on Maduro have been fatally undermined by divisions within its own ranks over what action to take.

Earlier in February, Italy blocked a planned EU statement that would have formally recognized Guaidó as interim leader of the country, with Rome saying the bloc should not meddle in another country’s internal affairs.