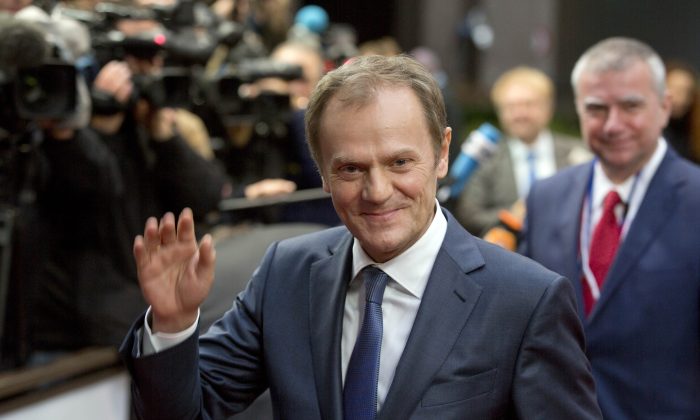 European Council President Donald Tusk waves as he arrives for an EU summit in Brussels on Thursday, Dec. 18, 2014. European Union leaders met Thursday to seek solutions to two major challenges, how to jumpstart sluggish economic growth at home, and how to deal long-term with Russia. (AP Photo/Virginia Mayo)
Business

ELMAU, Germany— European Union President Donald Tusk is urging leaders at the Group of Seven summit to present a united front on maintaining sanctions against Russia for its actions in Ukraine.

Tusk, a former Polish prime minister, says the only question is whether to make the sanctions even tougher.

He told a news conference Sunday that “if anyone wants to start a debate about the sanctions regime, the discussion could only be about strengthening them.”

The U.S. and the European Union have imposed financial restrictions on Russian companies and individuals over Russian support for separatists in eastern Ukraine. They and NATO say Russian troops and military equipment are in eastern Ukraine — something Russia denies.

Tusk said the summit in Bavaria could “reconfirm the G-7 unity on the sanctions policy.”