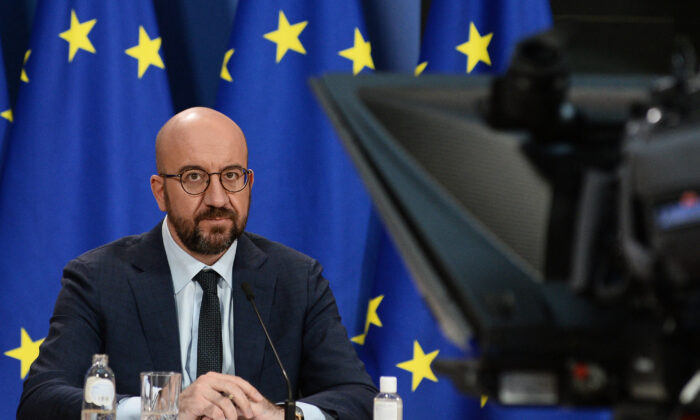 EU Calls on China to End Russian War on Ukraine

Leadership from the European Union (EU) and China met for a virtual summit April 1, amid increasing tensions over the Chinese Communist Party’s (CCP) tacit support of Russia’s invasion of Ukraine.

“We called on China to end the war in Ukraine,” said EU President Charles Michel during a press briefing after the meeting. “China cannot turn a blind eye to Russia’s violation of international law.”

The EU took the opportunity to warn the CCP against assisting the Russian war effort more overtly.

“Any attempts to circumvent sanctions or provide aid to Russia would prolong the war,” Michel added. “This would lead to more loss of life and greater economic impact.”

“We will also remain vigilant on any attempts to aid Russia financially or militarily. However, positive steps by China to help end the war would be welcomed by all Europeans and by the global community.”

Michel also said that the EU and CCP were in agreement that the war in Ukraine was a threat to global security.

According to a Chinese readout of the summit, Chinese leader Xi Jinping described the Ukraine crisis as “regrettable.” It also claimed that the regime’s position on the issue was “consistent and clear-cut” and that it “always stands on the side of peace.”

But European Commission President Ursula von der Leyen said after the call that Beijing did not offer any assurances to Brussels about its stance on the war.

“China has an influence on Russia. And therefore we expect China to take its responsibility to end this war” and push Russia toward a peaceful solution, she said at a press conference.

Leyen also warned that the regime would suffer “major reputational damage” among the European business community if it stayed on the fence or sided with Russia during the war.

The EU-China summit came a few days after the regime’s Foreign Minister Wang Yi met with his Russian counterpart in China, during which Beijing said it was “more determined” to boost bilateral ties with Moscow.

On Feb. 4, Xi and Russian leader Vladimir Putin announced an agreement that China and Russia would maintain a “no limits” partnership, and it was reported by Western intelligence sources that CCP officials knew about Putin’s war plans weeks in advance.

Since then, the CCP has maintained that Russia is its most important strategic partner, and U.S. intelligence leaders have warned that the partnership between China and Russia, and against the West, will only deepen in the coming years.

The CCP has also continually attempted to leverage Russia’s invasion of Ukraine as an opportunity to carry out anti-American and anti-NATO propaganda. It has repeated Russian disinformation about biological weapons labs and actively censors media that refer to the war as an invasion.

Despite claims of expansion, Ukraine was not under consideration for NATO membership. If Ukraine were to have applied to the alliance for membership, it would be denied because NATO’s bylaws prevent any nation from joining that does not maintain territorial integrity. Such has been the case in Ukraine since the Russian annexation of Crimea in 2014.