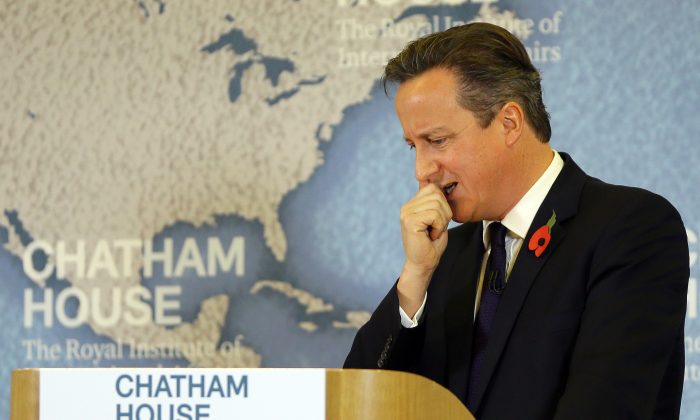 Britain's Prime Minister David Cameron thinks during a question and answer session after he delivers a speech on EU reform and the UK’s renegotiation, in London, Tuesday, Nov. 10, 2015. (AP Photo/Kirsty Wigglesworth)
Europe

BRUSSELS—Top officials in Britain and the European Union say they are optimistic about striking a deal next month on reforms aimed discouraging Britain from leaving the 28-nation bloc.

EU Commission President Jean-Claude Juncker said Friday that he is “quite sure” a deal will be brokered at a Feb. 18-19 summit in Brussels. That would allow Prime Minister David Cameron to call a referendum on Britain’s EU membership as soon as the summer.

Cameron has promised to hold the vote by the end of 2017, and says he will argue to stay in the EU as long as he gets a new deal for Britain, including more power to curb immigration and looser ties with the Brussels-based EU.

I’m quite sure that we will have a deal, not a compromise, a solution, not a weak compromise, a permanent solution in February,” Juncker said in Brussels.

British Treasury chief George Osborne said the “essential pieces” of a deal were falling into place.

Cameron argues the EU needs to fundamentally change the way it is run, reducing bureaucracy and handing more power to national legislatures. Other EU leaders are sympathetic to that view.

Cameron’s most contentious goal is to bar migrants from other EU countries from receiving some benefits until they have been in Britain for up to four years. That is strongly opposed by some other EU leaders, who see it as violating the fundamental principle of free movement among the bloc’s member states.

Juncker, who has acted as a facilitator between Britain and the other EU members, said the welfare issue would be “particularly difficult.”

Still, there was growing optimism on both sides of the Channel a deal could be brokered.

Osborne said the Treasury was not making plans to navigate Britain’s exit from the EU. He also dismissed suggestions — made by London Mayor Boris Johnson, among others — that a referendum vote to leave could trigger negotiations on re-entry under different terms.

Britain’s industry and services sector stands to lose billions in trade if the country leaves the EU. Europe would also lose if Britain departs, leaving the continent with much less diplomatic and military clout.