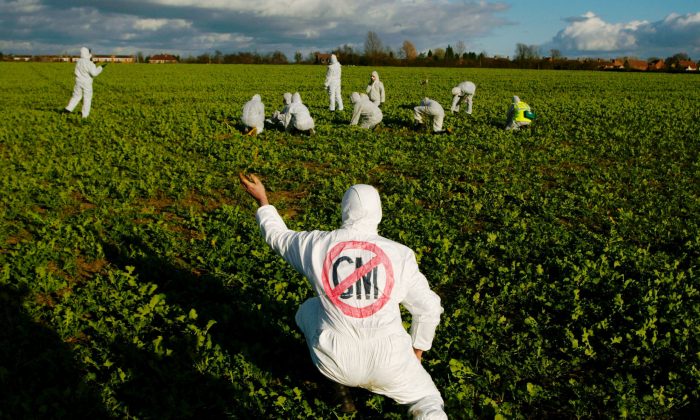 A protester in a field of genetically modified (GM) rapeseed crops in Warwickshire, England, March 9, 2002. The European Union's relatively stringent GM regulations are cast in a different light by research to be presented at the Agricultural and Applied Economics Association’s 2013 annual meeting in August 2013. (Sion Touhig/Getty Images)
12- OBSOLETE

EU at a GMO Crossroads

STOCKHOLM—The restrictive stance of the European Union on genetically modified organisms (GMO) has frustrated major corporations and some scientists. But there are signs that European politicians might be slowly opening up concerning policy on genetically modified (GM) animals. A new study also shows that European consumers are not more averse to GMOs than consumers in other parts of the world.

In May, the European Food Safety Administration (EFSA) released guidelines for assessing health and environmental risks related to GM animals. This was seen by many as a recognition that applications for raising GM animals will be coming soon, and the EU is preparing to at least deal with them.

Although these guidelines are the culmination of several years of work, their release almost coincided with Monsanto’s declaration that it will stop trying to get its GM crops approved in the European Union (EU).

Earlier this year, another company that develops GMOs, BASF, terminated trials for a GM potato in Europe. The company cited lack of both consumer enthusiasm and political support. This captures well the image of an EU on the fence about GMOs.

Meanwhile, Swedish scientists just completed a meta-study (that is, a study of other studies) to get a handle on consumer attitudes toward GMOs and biotechnology in food worldwide.

It shows no significant differences between consumers in different parts of the world, according to one of the authors, professor Carl-Johan Lagerkvist. The study, titled “Consumers’ Evaluation of Biotechnology in Food Products,” will be presented at the Agricultural and Applied Economics Association’s 2013 AAEA and CAES Joint Annual Meeting in Washington, D.C., in August.

“We have found European consumers to be neither more nor less positive to biotechnology [in food] than consumers elsewhere,” Lagerkvist said.

The analysis combines information from 214 studies, including more than 200,000 respondents from 58 geographical regions, and is limited to questions about biotechnology (not only genetic modification) in food. Responses were overall rather balanced between regions, said Lagerkvist.

He mentioned the Eurobarometer (an EU public-opinion survey) as an example of a survey in which the questions about GMO were often framed in a negative way. The questions addressed risks and moral issues, rather than benefits.

“We have found [in our study] that if you frame your questions in a more negative way, you get a more negative evaluation. When we have compensated for such effects, our findings do not support that European consumers are more negative [to biotechnology in food] than others,” he said.

So, how does one explain the differences between the EU and the United States in their respective approaches to GMOs? The answer, according to several scientists with whom the Epoch Times has spoken, lies mostly in the agricultural situation in the EU.

Professor Stefan Jansson at the Department of Plant Physiology of Umea University in Sweden explained, “There are some differences in public attitudes, but lobbying, agricultural subsidies, and protectionism is what is feeding all of this.” Professor Sten Stymne at the Swedish University of Agricultural Sciences echoed and further developed this view.

“We must remember that European agriculture is heavily subsidized and protected,” he said. He gave the example of French wine farmers: France wants to keep its lovely vineyards, so it subsidizes an overproduction of wine. Much of the surplus is used for distilling ethanol, which is then used to fuel cars. The European Commission makes up the difference.

“There is no incentive to bring in GMOs [into the EU],” Stymne said. “Quite the opposite: If they were indeed brought in, that would mean taking a step toward actually competing on the world market.”

Politicians in many major EU countries are heavily influenced by the agricultural lobbyists, and this is one of the main reasons for the current state of affairs, Stymne said. Resistance also comes from the organic farming movement, environmentalists, and others. But these are global movements, equally active in the EU, the United States, and elsewhere.

Ed Davitt, communications officer of Greenpeace EU cited similar reasons for the difference between the EU’s GMO situation and that in the United States, but he also emphasized that GM technology took hold in the United states earlier on, and that U.S. agriculture tends to be larger in scale, more centralized, and more energy-intensive.

He said the European public also generally has a greater awareness of food issues.

In Defense of GMO Regulation

Davitt defended the EU regulations, both from a democratic and from a scientific point of view.

“The rules the EU has put in place have largely been due to the democratic decision-making processes in the European Parliament and Council, as is their right,” he said. “The European Commission proposes policy on agriculture and environmental health issues on the principle of the latest available scientific advice.”

“EU restrictions, such as the recent ban on bee-killing neonicotinoid pesticides is not some emotional act of will—it follows scientific examination and political discussion,” Davitt said.

So where is the EU headed? Both Jansson and Stymne believe that the EU will inevitably move toward a greater acceptance of GMO products. Yet the professors said the rate of change is slow.

“Each year, the EU is finding itself in an even more difficult position,” said Stefan Jansson. “As third-world countries are developing their own GMO crops, the main argument of the Europeans—that this is a technology only demanded by, and only serving, the major corporations—is crumbling. Europe is still doing its utmost to not take heed of this development, and its policy is still to slow it down in Africa, for instance. But this is untenable in the long run.”

Mariette Andersson, a scientist who works for the Swedish state-sponsored Mistra Biotech project, said any move toward more liberal GMO policies in the EU will not be quick or easy.

“Things are moving very slowly right now,” she said. “In my opinion, the EU is losing out on many products with great environmental potential. … Many of them would contribute to a sustainable society.”

Greenpeace has a different view. Davitt said Greenpeace opposes “the patenting of life” while supporting “other biotechnologies that do not involve this commercialization of plant- and animal-life DNA.”

“It seems more likely that we will be able to move forward with real efficient and productive technologies that help us to move further away from chemically intensive agriculture,” he said.

A Market for GMO?

Davitt said the economic demand does not exist in Europe for GMOs and the environmental concerns will outweigh the benefits.

“Monsanto’s recent indication that it has decided to stop pushing GMO technologies where they are not wanted is indicative of the political and consumer resistance to these products,” he said.

Andersson noted that the currently perceived resistance doesn’t prevent many GMO products from entering the EU market: “Unfortunately, I can’t say where the EU is going, but we are already using genetically modified feed [for livestock] and textiles, such as cotton, which we import from other countries, so we are not completely GMO-free in the EU.”