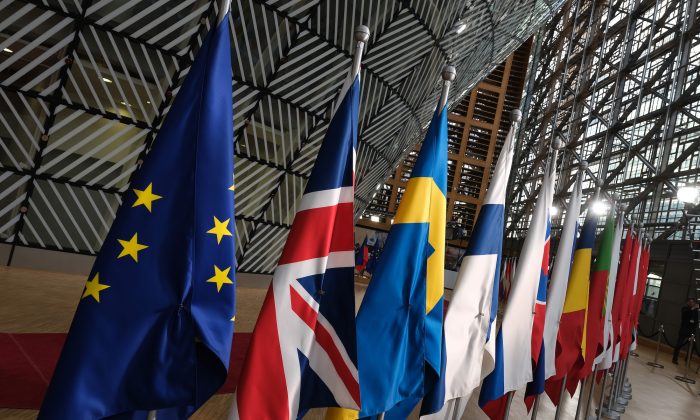 BRUSSELS—The European Union has warned social-media companies, including Facebook, that they aren’t doing enough to stamp out fake news, amid concerns foreign actors such as Russia or China will attempt to manipulate voting in upcoming EU elections.

Brussels said the latest monthly reports from the technology giants showed that there are “outstanding issues” over fake accounts and access for fact-checkers.

However, senior officials said they were heartened that digital platforms are making progress on boosting transparency over who pays for, and places political advertising in the digital sphere.

The verdict was announced by the bloc’s security commissioner, Sir Julian King, on April 16 during a debate in the European Parliament over the threat that foreign actors, including Moscow and Beijing, pose to next month’s EU elections.

“At first sight, the latest reports do indeed suggest further progress has been made in terms of transparency for political ads, and indeed ads in general, but there are still some outstanding issues,” he said. “Abraham Lincoln said elections belong to the people, it’s their decision. We need to make sure that it stays that way.”

Brussels has implemented a raft of new measures to combat domestic and international cybersecurity threats ahead of the continent-wide election to pick the next EU Parliament, which takes place between May 23-26.

These include the launching of a rapid alert system, where national capitals share details of specific threats, the setting up of the bloc’s first cybersecurity agency, called ENISA, and overhauling internal rules so political parties that misuse personal data during campaigning can be fined.

Earlier this month, the EU Parliament, Commission, and the 28 member states, together with ENISA, war-gamed their crisis-response plans to a cybersecurity attack during the elections, with one final exercise scheduled for mid-May.

“Next month, the European elections will take place in a very different political context than the previous one,” said Melania Ciot, representing the Romanian presidency of the EU. “If some attacks were to be successful in one member state, it would most likely have a domino effect and affect the democratic processes in the other 27. Thus, it would risk discrediting the EU institutions as a whole.”

Anna Elżbieta Fotyga, a Polish member of the European Parliament (MEP) who is her country’s former foreign affairs minister, accused Moscow of being a major culprit behind such attempts.

“Technology and influence operations have been used by Russia against the West for quite a long time already, including elections,” Fotyga said.  “What for? To undermine faith and confidence in democracy, to exacerbate existing divisions, to confuse truth, and amplify narratives that are friendly to Russia.”

Portuguese MEP José Inácio Faria added that “the risk of manipulation of the upcoming elections through fake news, disinformation, and cyber attacks is high” raising concerns about not just Russian but also Chinese interference.

European politicians are especially on edge as some parties in EU member states, many of which are sympathetic toward Moscow and Beijing, are expected to perform well at upcoming elections.

However, the breadth of the new measures and the pace with which they have been introduced have raised concerns among some MEPs that they could inadvertently affect free speech.

Jonathan Arnott, a British libertarian MEP, warned: “There is a danger when these tools are applied from the state level that free speech itself could become impaired, particularly online.”

Those accusations are contested by the Commission, with King insisting that the reforms are about promoting transparency over who controls debate online, not passing judgment on specific views.

“It is our duty to protect our elections in full respect of fundamental rights. We do not want to be the Ministry of Truth, but we cannot be naive. These elections will not be business as usual,” Ciot said.