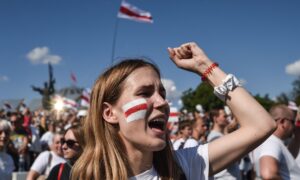 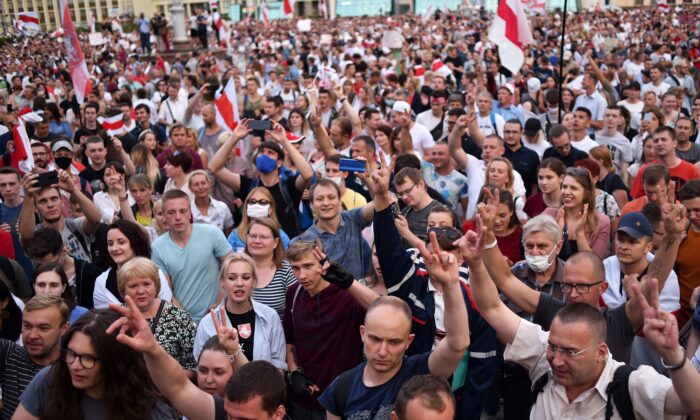 Leaders of the bloc’s 27 countries unanimously authorized travel bans and asset freezes against key figures in the regime and security services during an emergency video conference on Aug. 19.

They also issued a strong warning to Russian President Vladimir Putin not to intervene in the crisis, insisting that “the future of Belarus has to be decided by the people in Belarus, not in Brussels, not in Moscow.”

European Council President Charles Michel said a “substantial number” of figures involved in the rigging of the election and subsequent violent repression of peaceful protests will face sanctions.

He said that a list of targets will be drawn up and given the legal sign off as quickly as possible. He added that it isn’t decided whether Lukashenko himself will be included in the list, and the issue will be decided in the coming days.

EU leaders called for a “complete and transparent investigation” into abuses and the “immediate and unconditional release” of all those detained unlawfully during the 10 days of protests.

“The 9 August elections were neither free nor fair, therefore, we do not recognize the results. The people of Belarus have a right to determine their future,” EU leaders said in a joint statement.

“The EU will shortly impose sanctions against a substantial number of individuals responsible for violence, repression, and the falsification of election results.”

In a direct warning to Lukashenko not to escalate the violence, they warned him, “Any further deterioration of the situation will impact on our relationship and have negative consequences.”

Michel said that Putin had assured him during a phone call on Aug. 18 that the Kremlin has no intention of involving its military in dealing with the crisis.

The EU Council president said the pair had a “very clear and very frank exchange of views” and that he had stressed to the Russian president the need to “avoid external negative influences” on Belarus.

European Commission President Ursula von der Leyen said the EU will not get involved in the internal politics of Belarus, adding that “the future of Belarus must be decided by the Belarusian people. It must grow from within.”

“It is the Belarusian people who are demanding a rerun of truly fair and free elections. We support them in choosing the path they want to go down. It’s their decision on where they want to lead their country to.”

A defiant Lukashenko immediately hit back by accusing a number of European countries, including France and Germany, of fueling the protests against him, instructing his government to warn them “about the responsibility for fomenting unrest.”

He also ordered police to put down protests in a move that drew condemnation from European leaders including Gitanas Nauseda, the president of neighboring Lithuania, who said it could “lead to bitter sorrow.”

The Belarusian central election committee announced that it will press ahead with plans to inaugurate Lukashenko as the country’s president within the next two months despite the widespread protests.

German Chancellor Angela Merkel has ruled out acting as a mediator in the crisis, saying she had tried to speak to Lukashenko on the phone but “he refused to talk to me, which I regret.”

Instead, EU leaders said they “strongly support” using the Organization for Security and Cooperation in Europe, currently chaired by Albanian Prime Minister Edi Rama, as a go-between.