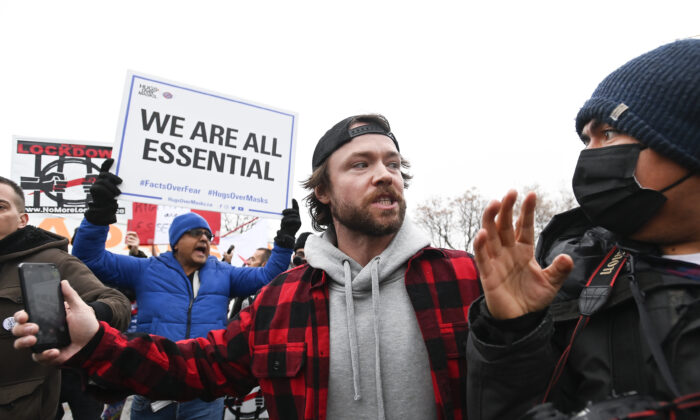 Adam Skelly, centre, owner of Adamson Barbecue, escorts a photographer from his property after defying provincial lockdown orders to shut down indoor and outdoor dining during the COVID-19 pandemic in Toronto, Canada, on Nov. 25, 2020. (Nathan Denette/The Canadian Press)
Canada

A Toronto restaurant is allowed to reopen its takeout and delivery services after its owner was charged for openly defying provincial COVID-19 orders to close last month.

Dr. Eileen de Villa, Toronto’s medical officer of health, released a statement on Dec. 14, lifting the requirements of the Section 22 order under the Health Protection and Promotion Act (HPPA) that ordered the closure of Adamson Barbecue in Etobicoke.

Villa said the order for the restaurant’s closure was rescinded because “the conditions that necessitated the order in the first place are no longer present at this point in time,” reported CP24. “There is no need for the order right now. However, that doesn’t mean that there aren’t other rules that need to be followed.”

Owner Adam Skelly has also been convicted of operating the restaurant without a business license since 2017, which can result in a maximum penalty of $25,000 for an individual and $50,000 for a corporation. The reopening of Adamson Barbecue is contingent on that Skelly obtain a business licence.

“The lifting of the requirements of the Section 22 order would permit the Adamson Etobicoke location to open for takeout, delivery, or drive through only as allowed for under the lockdown regulations, subject to compliance with the City of Toronto’s business licensing bylaw and passing a DineSafe inspection,” the statement read.

“Should that location defy the restraining order and the Lockdown Regulation and open for indoor and/or outdoor dining, the owner, the business, and/or its employees and agents could face contempt of court findings.”

A provincial order remains in place restraining Skelly and his restaurant employees from contravening the lockdown regulation under the Reopening Ontario Act (ROA), which prohibits indoor and outdoor dining.

On Nov. 26, a day after the restaurant’s closure, Skelly and his supporters sought to break through a cordoned-off section of the restaurant in an attempt to reopen business.

He was arrested on 13 criminal and non-criminal charges, including one count of attempting to obstruct police, one count of mischief under, one count of failing to comply with a continued order under the Reopening Ontario Act, and one count of violating the Trespass to Property Act after being directed to leave. He was released on bail the next day.