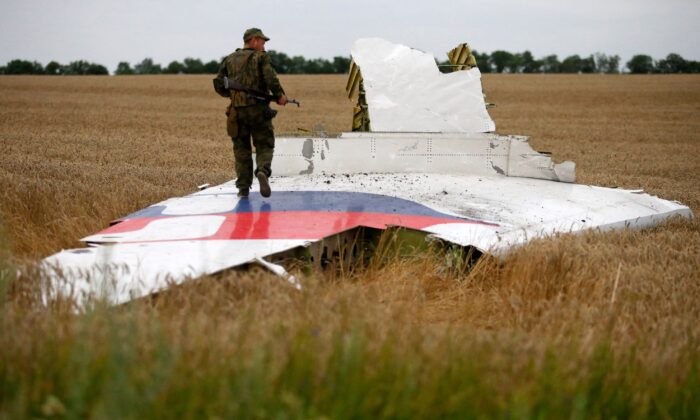 An armed pro-Russian separatist stands on part of the wreckage of the Malaysia Airlines Boeing 777 plane after it crashed near the settlement of Grabovo in the Donetsk region, on July 17, 2014. (Maxim Zmeyev/ Reuters)
Viewpoints

One really wonders how many people still remember that on July 17, 2014, a scheduled Malaysia Airlines Flight 17 (MH17) from Amsterdam to Kuala Lumpur was shot down by pro-Russian Donetsk separatists in Ukraine.

All 289 passengers and crew died in the tragedy, including 80 children. The President of Russia Vladimir Putin, denied the involvement of his country in the downing of the Boeing 777.

The case was filed in a court in the Netherlands to identify and prosecute four defendants allegedly responsible for firing the Russian-made Buk missile. The case ended recently on June 10 and judgment is expected later this year. However, it is unlikely that Russia will ever extradite the defendants to the Netherlands to face the judgment.

This case is also of immense importance to Australia because 38 of its countrymen perished.

The downing of MH17 surely stands out as one of the most evil events to happen on this date.

Yet the deeper and more profound reasons behind the incident remain largely unexplored.

Ethnicity Central to Nationhood in Europe

Much has to do with the predominantly Russian-speaking separatist states in the east of Ukraine that have self-declared their secession from the national government, calling themselves the People’s Republics of Donetsk and Luhansk, which share a border with Russia.

The idea of self-determination along ethnic lines has been strongly promoted throughout Europe for most of the 19th and 20th centuries.

In fact, this trend was so strong the victors of World War I redrew national boundaries in line with the geographical distribution of ethnic groups.

Czech writers Joroslav Krejci and Vitezslaw Velimsky pointed out in their book “Ethnic and Political Nations in Europe” that the redrawing of boundaries saw the portion of ethnic groups not living under a government fall from 26 percent in 1910, to about seven percent in 1930.

A rebirth of nationalism, defined as a desire to promote the strength and ambitions of the ethnic nations of Europe also facilitated the redrawing of the boundaries. Language always serves as a prominent symbol of the reawakened aspirations of ethnic groups.

With regards to a people’s right to self-determination and secession, it is instructive to compare the situation in the Donbas and Crimea, and with that of the Slavic nation of Kosovo.

Kosovo, at one time, was deemed to be an inherent part of Serbia, but its unilateral declaration of independence on Feb. 17, 2008, which came with a promise to embrace its multi-ethnic population was declared legal by the International Court of Justice in 2010.

The court confirmed that there is no international law that prohibited secession. Kosovo has a predominantly ethnic Albanian population and a large Serbian minority centred around the town of Mitrovica in the north of the country.

So, why haven’t international courts or institutions applied the same standard to the Donbas and Crimea in Ukraine?

The treatment of the contested parts of Ukraine differ markedly from the welcome attitude towards the secession of Kosovo from Serbia.

The issue is important because the Donbas and Crimea are mainly populated by Russian-speaking inhabitants who have openly flagged a desire to split from Ukraine.

In fact, 97 percent of the population of Crimea, in a referendum on March 16, 2014 voted in favour of integration with the Russian Federation—where it has longstanding cultural ties. Going back to 1783, Russian Empress Catherine the Great incorporated the Crimea into the Empire of Russia following the defeat of the Ottomans and consolidated Russian power around the Black Sea region.

In 1954, the administration of Crimea was allocated to Ukraine with the expectation it could help cement closer links between Russia and Ukraine.

Reprisal for Past Actions?

Part of the reason for the welcome treatment of Kosovo’s split from Serbia can be found in the West’s desire to punish it for allegedly starting and prosecuting the Balkan Wars in the 1990s.

This same reasoning can be applied to Russia: the West’s refusal to recognise the Donbas secession movement and integration of Crimea into Russia, may be a penalty for Russia’s involvement in the downing of MH17 and its invasion of both regions with military force.

The tragedy of MH17 should never be forgotten, yet it is worth considering the wider tensions that continue to exist in the region.