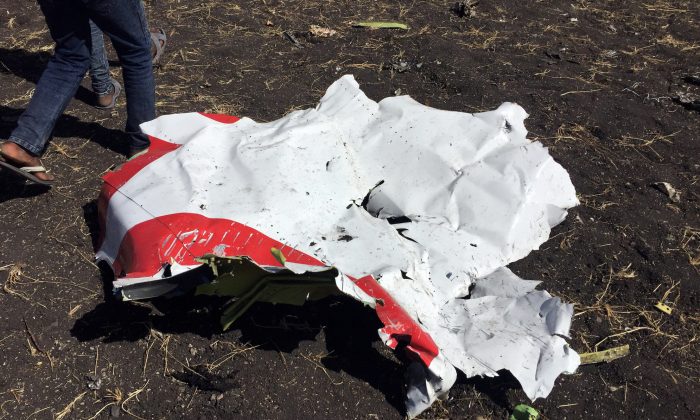 People walk past a part of the wreckage at the scene of the Ethiopian Airlines Flight ET 302 plane crash, near the town of Bishoftu, southeast of Addis Ababa, Ethiopia, on March 10, 2019. (Tiksa Negeri/Reuters)
Africa

UPDATE: Officials Say All 157 Killed On Board Crashed Ethiopian Airliner

UPDATE: Ethiopia’s state television has announced that all 149 passengers and eight crew members aboard the crashed Ethiopian Airlines flight are dead.

“There are no survivors onboard the flight, which carried passengers from 33 countries,” said state-run Ethiopian Broadcasting Corporation, citing an unidentified source at the airline, according to The Independent.

Asrat Begashaw, a spokesman for Ethiopian Airlines, was cited by The Associated Press as saying that 32 Kenyans and 17 Ethiopians are among the dead.

The cause of the crash is not immediately known.

#BREAKING— according to reports, there are no survivors following a plane crash in Ethiopia. 157 people on board. Just awful. pic.twitter.com/waoboEDFzN

PREVIOUS: Ethiopian Airlines flight to Nairobi crashed on Sunday, March 10, with 149 passengers and eight crew members aboard, according to the air carrier.

The Boeing 737 passenger jet was heading from the Ethiopian capital of Addis Ababa to Kenya’s capital city of Nairobi.

“The aircraft B-737-800MAX with registration number ET-AVJ took off at 8:38 a.m. local time from Addis Ababa, Bole International Airport and lost contact at 8:44 a.m.,” the airline said in a statement.

“The office of the PM, on behalf of the Government and people of Ethiopia, would like to express it’s deepest condolences to the families that have lost their loved ones on Ethiopian Airlines Boeing 737 on regular scheduled flight to Nairobi, Kenya this morning.”

The airline said in the statement that search and rescue operations were underway near the crash site around the town of Bishoftu.

No information was given on the number of casualties, but the airline said, “it is believed that there were 149 passengers and 8 crew onboard the flight.” Officials added that the details of the flight manifest were being reviewed and that more information would be released when available.

“Ethiopian Airlines staff will be sent to the accident scene and will do everything possible to assist the emergency services,” the statement added.

The state-owned Ethiopian Airlines calls itself Africa’s largest carrier and has ambitions of becoming the gateway to the continent.