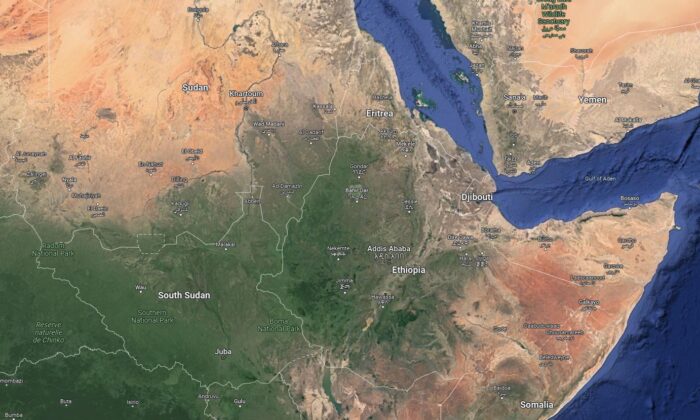 Location of the countries Ethiopia and Sudan in 2022. (Google Maps/Screenshot via The Epoch Times)
Africa

CAIRO—Ethiopia killed seven Sudanese soldiers and a civilian in a border area in the latest sign of deteriorating ties between the east African nations.

A Sudanese military statement late Sunday described the killings as a “cowardly act” and said Khartoum would retaliate.

The killings violated “all laws and customs of war and international humanitarian law,” the statement said. It said Ethiopia displayed the bodies out in the open. It did not provide further details including how a civilian farmer was involved.

Sudanese media outlet Monte Carro posted a graphic photo online purportedly showing the bodies of seven dead in military uniforms lying motionless as a group of people looked on. It said the bodies were of the dead soldiers.

Sudan’s Foreign Ministry said in a statement Monday the eight had been taken into Ethiopia after the soldiers were held captive in an area inside Sudan on June 22.

The ministry said it was recalling the Sudanese ambassador from the Ethiopian capital of Addis Ababa and summoned the Ethiopian envoy in Khartoum to protest the killings. It also said it would complain to the United Nations.

Ethiopia’s Foreign Ministry confirmed the killings in what it described as “a tragic incident.” It said in a statement that a Sudanese military unit crossed into Ethiopia with the support of rebels from the Tigray region and suggested that’s when they were killed.

“The Government of Ethiopia, therefore, hopes that the Sudanese Government would restrain itself from any escalation of the incident and would take measures that could de-escalate the situation,” the statement said without elaborating.

Ties between the two neighbors have deteriorated in recent years amid a long-running border dispute over large swaths of agricultural land in the al-Fashaqa area. Sudan insists the lands are within its borders, according to an agreement that demarcated the boundary between their territories in the early 1900s.

Sporadic clashes have erupted over the past two years there, after Sudan said it reclaimed most of its territory and called on Ethiopia to withdraw troops from at least two points it says are inside Sudan.

In November, Sudan said six of its troops were killed in an attack by Ethiopian military and militia forces in the area. The two nations have held talks, most recently in Khartoum in December 2020, to settle the dispute over al-Fashaqa, but have not made progress.

Ethiopia, in turn, says Sudan took advantage of the deadly conflict in Ethiopia’s northern Tigray region to enter Ethiopian territory. It has called for Sudanese troops to return to positions they held before the Tigray fighting erupted in November 2020, pitting Ethiopia’s federal forces against regional fighters.

The yearslong dispute now centers on how quickly Ethiopia should fill and replenish the reservoir and how much water it should release downstream in case of a multi-year drought.

Egypt, which relies on the Nile for more than 90 percent of its water, fears a devastating impact if the dam is operated without taking its needs into account. Ethiopia says the $5 billion dam on the Blue Nile is essential, arguing that the vast majority of its people lack electricity.

Sudan wants Ethiopia to coordinate and share data on the dam’s operation to avoid flooding and protect its own power-generating dams on the Blue Nile.

Egypt and Sudan say they want a legally binding agreement to regulate the filling and operation of the dam, but the three nations have failed to reach a compromise in their yearslong negotiations.