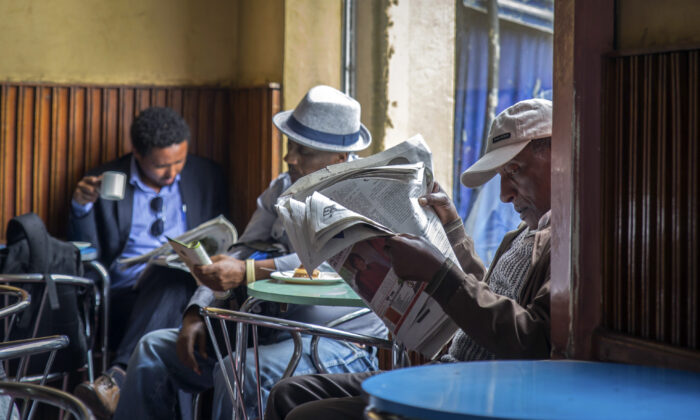 Ethiopian men read newspapers and drink coffee at a cafe during a declared state of emergency and internet shurdown in Addis Ababa on Oct. 10, 2016. (Mulugeta Ayene/AP)
Africa

The law’s approval, with 23 lawmakers opposing and two abstaining, came amid concerns over widespread online false information and hate speech that some observers blame for ethnic tensions in the East African nation.

Others worry the new law will restrict freedom of expression in a country that once jailed thousands of people, including journalists, over political views.

The new law “will not meet its goal but will discourage free expression and may eventually target people who make innocent mistakes,” Befekadu Hailu, director of the Center for the Advancement of Rights and Democracy, told The Associated Press. “But most importantly, legal actions are usually used by the state to stifle dissent in the country. To say something positive … it may have a deterrence effect for irresponsible social media users.”

Ethiopia has experienced sometimes deadly ethnic violence since June 2018, shortly after Prime Minister Abiy Ahmed announced sweeping political reforms for which he later was awarded the Nobel Peace Prize. The loosening of restrictions on political space also led some in the country of more than 80 ethnic groups to air long-held grievances.

Some government officials and observers have called for the need to regulate hate speech and disinformation online, citing the ethnic unrest.

Lawmakers said the law is needed because existing legal provisions didn’t properly address hate speech and disinformation and said it will not affect citizens’ rights beyond protecting them.

According to the new law, content with hate speech or disinformation that is broadcast, printed, or disseminated on social media platforms with more than 5,000 followers is punishable with up to three years in prison and a fine of up to 100,000 birr ($3,000).

The law, however, says “dissemination” doesn’t include liking or tagging such content on social media.

“The Ethiopian government is under increasing pressure to respond to rising communal violence that has at times been exacerbated by speeches and statements shared online,” Laetitia Bader, senior Africa researcher with the rights group, said in December 2019. “But an ill-construed law that opens the door for law enforcement officials to violate rights to free expression is no solution.”