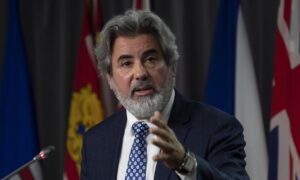 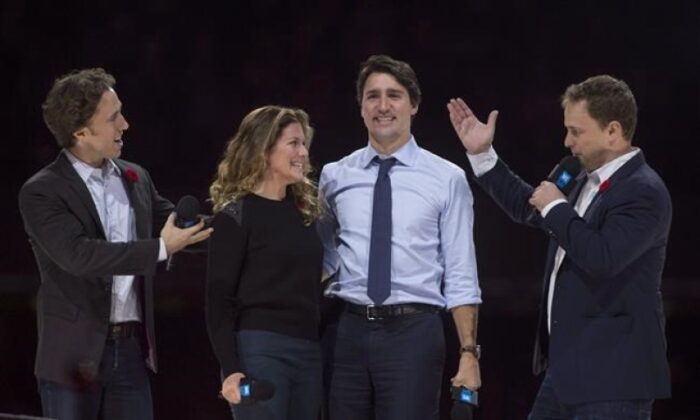 Co-founders Craig (left) and Marc Kielburger introduce Prime Minister Justin Trudeau and his wife Sophie Gregoire-Trudeau as they appear at the WE Day celebrations in Ottawa on November 10, 2015. (Adrian Wyld/The Canadian Press)
Canada

Ethics Watchdog: PM Didn’t Violate Conflict Rules Over WE Charity, but Morneau Did

OTTAWA—Prime Minister Justin Trudeau did not breach the Conflict of Interest Act over failing to recuse himself from cabinet discussions to have WE Charity operate a federal student-volunteer program, Canada’s ethics watchdog say in a report released Thursday.

In a separate report, federal ethics commissioner Mario Dion found that former finance minister Bill Morneau did violate the rules and should have recused himself.

He says Morneau “gave WE preferential treatment by permitting his ministerial staff to disproportionately assist it when it sought federal funding.”

Dion says he was asked to investigate Morneau by several MPs because of what some believed to be close ties between his family and the charity, founded by brothers Marc and Craig Kielburger.

He found Craig Kielburger fell under his office’s definition of a friend to Morneau, which meant the former minister should have known it created the potential for conflict.

Dion says during Morneau’s participation in discussions around the student-volunteer program he “placed himself in a conflict of interest on several occasions.”

On Thursday, Morneau, who resigned as finance minister and a Liberal MP in August 2020, issued a statement to note the report says it was the public service that decided WE Charity should administer the program.

“As I have already stated, in retrospect, I should have recused myself from the discussion,” Morneau wrote in a statement shared on Twitter.

Last summer, Trudeau also apologized for not recusing himself from talks around the program given that he and his relatives had taken part in eight WE events, with his brother and mother being paid for their involvement.

On Thursday, Trudeau said in a statement by Dion that his report confirms what he had already said about the WE Charity affair.

“At the heart of this initiative was getting support for youth during this pandemic as fast as possible,” Trudeau said in the statement.

“This pandemic has been hard on many Canadians, especially front-line health-care workers who are doing everything possible to keep us safe, the essential workers who are keeping us fed and the small business owners who have been under immense pressure, but also for families and for young people,” he said.

“My job as prime minister is to do whatever it takes for as long as it takes by providing direct support to people and businesses to get through this.”