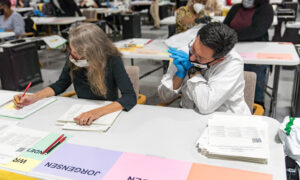 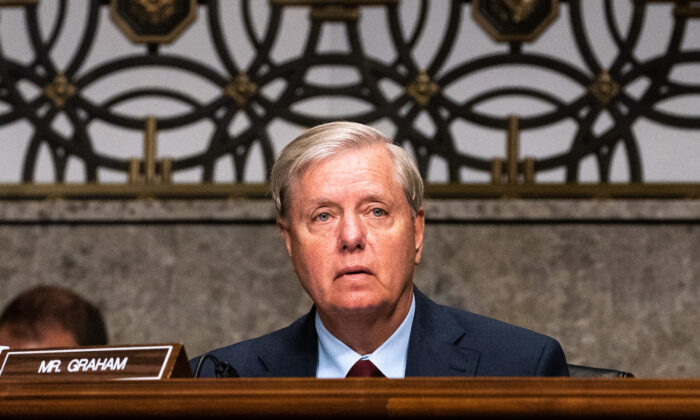 A complaint to the Senate Ethics Committee has been filed against Sen. Lindsey Graham (R-S.C.) requesting a probe into whether the South Carolina senator tried to pressure Georgia Secretary of State Brad Raffensperger to throw out legally cast ballots and so may have committed an ethics violation.

Walter Shaub, a former director of the U.S. Government’s ethics office; Richard Painter, the chief ethics lawyer for President George W. Bush; and Claire Finkelstein, the director of the University of Pennsylvania’s Center for Ethics and the Rule of Law, filed the complaint on Nov. 18 (pdf).

“Secretary Raffensperger’s allegation describes extreme misconduct and abuse of senatorial authority,” the attorneys wrote in the complaint, which is based on allegations Raffensperger raised in an interview with The Washington Post, in which he said Graham asked him whether election officials had the authority to reject mail ballots in counties with higher rates of signature discrepancies.

He later told CNN that Graham first asked him “if the ballots could be matched back to the voters,” with Raffensperger adding that his sense of the conversation was that “it was just an implication of, ‘Look hard and see how many ballots you could throw out.'”

Graham rejected Raffensperger’s characterization of their conversation, telling CNN that the claim that he sought to have legal ballots tossed is “ridiculous.”

“What I’m trying to find out was how do you verify signatures on mail-in ballots in these states that are the center of attention?” Graham said, presumably referring to the legal challenges to election results in a handful of states that have been put forward by President Donald Trump’s legal team and Republican allies amid allegations of voter fraud and other irregularities.

“When you mail in a ballot, you’ve got to have some way to verify that the signature on the envelope actually matches the person who requested the ballot,” Graham told the outlet. “It seems to me that Georgia has some protections that maybe other states don’t have, where you go into the portal to get your ballot. But I thought it was a good conversation. I’m surprised to hear him verify it that way.”

The three attorneys filing the complaint said that, based on the reports around the conversation between Graham and Raffensperger, the Ethics Committee should launch a probe.

“The Senate Select Committee should investigate this matter and, if it finds Chairman Graham committed the alleged misconduct, seek an appropriate sanction or any other appropriate remedy,” they wrote.

“Even if your committee were to reject Secretary Raffensperger’s allegation regarding the content of the communication, the conduct Senator Graham has admitted is deeply troubling,” they continued. “There can be no legitimate reason for the Judiciary Committee’s chairman to call a top election official regarding an ongoing vote count.”

The large-scale expansion of mail-in voting has thrust the issue of election integrity into the spotlight, with Trump claiming that Georgia election officials are unable to verify signatures on mail-in ballot envelopes because of a legal settlement known as the “consent decree.”

Among other things, the settlement sets steps for local election officials to notify a voter—by phone, mail, or email—in a timely fashion about problems with a signature.

Raffensperger has pushed back on claims that the consent decree in any way compromised officials’ ability to verify signatures.

“We strengthened signature match. We helped train election officials on GBI signature match—which is confirmed twice before a ballot is ever cast,” Raffensperger, a Republican, wrote in a post on Facebook.

“Our office has received multiple requests to match ballots back to voters—exposing how a Georgia voter has voted.” Raffensperger’s post reads. “We stand ready to prevent any and all attempts from any party to intimidate voters. Georgia voters have a right to vote in secret without intimidation from any political candidate or party,” he added.

Meanwhile, Georgia elections officials have completed their statewide risk-limiting audit of the razor-thin presidential race, involving a hand recount that the Raffensperger’s office said “upheld and reaffirmed the original outcome produced by the machine tally of votes cast,” with the Trump campaign disputing the result.

“The audit confirmed the original result of the election, namely that Joe Biden won the Presidential Contest in the State of Georgia,” the risk-limiting audit report states (doc). It shows Democratic presidential nominee Joe Biden with 2,475,141 votes and President Donald Trump with 2,462,857, a margin of 12,284 votes, eroding Biden’s pre-audit lead by 496 votes.

The Trump campaign dismissed the report, arguing that the hand recount did not include a signature matching process and so “simply recounted all of its illegal ballots.”

“We continue to demand that Georgia conduct an honest recount, which includes signature matching. We intend to pursue all legal options to ensure that only legal ballots are counted,” said Jenna Ellis, senior legal adviser to the Trump campaign, in a statement.