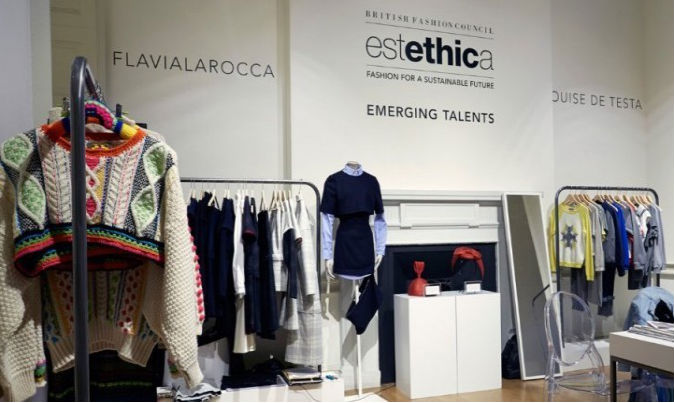 In just five short years, Raeburn has made a name for himself as Britain’s most innovative designer, having used re-purposed parachutes and army supplies in his first and subsequent collections.

But this season, the designer has brought in a touch more femininity, with the addition of a shocking fuchsia fabric, pastel pink and pale blue touches, and floaty Italian organza. The result is all that distinctively sporty Raeburn style, with a candy-sweet flavour.

The first was a collection of unique t-shirts created using leftover materials from British designers including Agi & Sam, Giles Deacon, Kit Neale, Louise Gray and Zandra Rhodes and secondly was an installation supported by Monsoon to announce his collaboration with Indian SEWA (Self Employed Women Association) using intricate beaded fabric waste provided by SEWA and Monsoon.

To further entertain attendees, there was an Estethica film screening of The Next Black, a documentary exploring the future of clothing produced by AEG, screened alongside five short films from the Estethica Emerging Talents: Auria, Bottletop, Flavia La Rocca, Louise de Testa and Wool and the Gang.

Wool and the Gang Interview (Fabricated Tales in SoHo)

Flavia La Rocca wants you to get creative with her clothing. Our new favorite emerging eco designer has constructed her range so that each piece can be worn in different ways throughout different situations.

For example, she’s included elastic bands that split, allowing for various adjustments; removable braces, and hidden zippers that can expand or contract garments, meaning one piece can in fact take on many different forms.

Generally, the designer favours clean, geometric lines, and prefers to use natural cotton and crepe materials, as well as eel skin, which is more eco-friendly than cow leather.

This season, her pallete is largely monochrome, but includes shades of blue, copper and cherry for touches of summery colour.

Estethica was founded by the British Fashion Council (BFC) with Orsola de Castro and Filippo Ricci in September 2006, to promote sustainable fashion at the heart of London Fashion Week.

Orsola and her partner Filippo are the founders of pioneering eco fashion label From Somewhere and the zero waste-upcycled Reclaim To Wear brand.