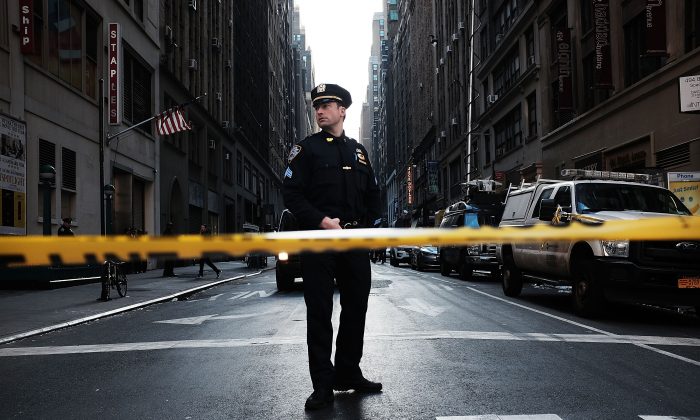 A police offficer stand at the scene of a midtown shooting that left one dead with two others wounded in New York City on Nov. 9, 2015. (Spencer Platt/Getty Images)
Opinion

Law enforcement professionals are the ethical guardians of democracy who protect and serve communities throughout the nation.

The challenge to our law enforcement professionals is daunting as we continually witness violence, apathy, brokenness, cynicism, and callousness throughout society.

There is also a new term called the Ferguson effect, referring to police being passive under heightened security or concerns about being the next viral video.

It does not matter if the cobblers and masons fail to do their jobs well, but if the guardians fail, the democracy will crumble.
— Plato, Greek philosopher

Policing is an honorable profession and as far back as the Greek philosopher Plato (c. 428–347 BCE) ethical guardians were critical to democracy.

Plato argued that although there are many different professions in society; including farmers, builders, and clothiers, guardians were a unique class of citizens.

Plato defined guardians as those who protect society from its enemies and enforce its laws.

In Plato’s words, “It does not matter if the cobblers and masons fail to do their jobs well, but if the guardians fail, the democracy will crumble.”

Ethics: The Heart of Democracy’s Guardians

Complementing the concept of guardians is the demand that law enforcement professionals live by the highest ethical standards.

The International Association of Chiefs of Police includes these principles in its code of ethics:

“As a law enforcement officer, my fundamental duty is to serve the community; to safeguard lives and property; to protect the innocent against deception, the weak against oppression or intimidation and the peaceful against violence or disorder; and to respect the constitutional rights of all to liberty, equality, and justice.

“I will keep my private life unsullied as an example to all and will behave in a manner that does not bring discredit to me or to my agency. I will maintain courageous calm in the face of danger, scorn or ridicule; develop self-restraint; and be constantly mindful of the welfare of others…

“… I recognize the badge of my office as a symbol of public faith, and I accept it as a public trust to be held so long as I am true to the ethics of the police service…”

For Plato, the concept of developing guardians was inseparable from cultivating an ethical temperament which depended on a sound education that began in the earliest years of schooling.

America must revitalize ethics as the heartbeat of our society and make character education front and center in our schools again, as our youth are the future of America and critical to our democracy.

We must also support our law enforcement professionals and make sure they have world class ethical development, training, certifications, and ongoing programs respecting their demanding mission as ethical guardians.

All who cherish America must also remember our fallen ethical guardians with honor, respect, and dignity.

According to the National Law Enforcement Officers Memorial Fund (NLEOMF), there have been 13 firearms-related law enforcement fatalities as of March 14, an increase of 225 percent since this time last year.

One fatality was on March 13, with a Prince George’s County, Maryland police officer, 28-year-old Jacai Colson. Officer Colson was a four-year veteran of the department senselessly killed in what police call an “unprovoked attack” by an errant round during a firefight.

Despite the so-called Ferguson effect, America’s ethical guardians are the lifeline of protecting our communities and we must not allow any exploitation of our democracy.

Law enforcement will rise to the occasion with the moral courage to find the way. They deserve an iron-clad collaboration from America’s law-abiding citizens, refusing to allow emboldened criminals to undermine our society.

We will be on the path to reawakening the nation and safeguarding our democracy when we work to instill ethics into the heart of America, and give our ethical guardians our unwavering support for their dedication to protect and serve.