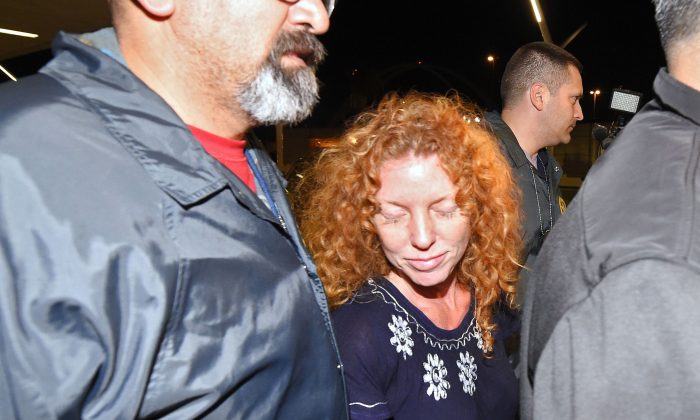 Tonya Couch, center, is taken by authorities to a waiting car after arriving at Los Angeles International Airport, Thursday, Dec. 31, 2015, in Los Angeles. Authorities said she and her son, Texas teenager Ethan Couch, who was sentenced to probation after using an "affluenza" defense for a 2013 wreck in Texas, fled to Mexico together in November as prosecutors investigated whether he had violated his probation. Both were taken into custody Monday, Dec. 28, after authorities said a phone call for pizza led to their capture in the resort city of Puerto Vallarta. (AP Photo/Mark J. Terrill)
Crime and Incidents

Ethan Couch’s Mom Back in Texas to Face Charges

FORT WORTH, Texas  — The mother of a fugitive teen who used an “affluenza” defense after killing four people in a drunken crash was returned to Texas on Thursday to face a charge of helping her son evade capture.

Tonya Couch, who was deported from Mexico last week, arrived on a flight from Los Angeles and was taken to Tarrant County Jail in handcuffs and leg irons. She is expected to be arraigned Friday on a charge of hindering the apprehension of a felon. Her bond was set at $1 million.

Authorities believe Couch and her 18-year-old son, Ethan Couch, fled Texas in November as prosecutors investigated whether Ethan Couch had violated his probation in the deadly 2013 drunken-driving wreck. They disappeared shortly after a video surfaced showing what appears to be Ethan Couch at a party where people were drinking.

Ethan Couch is being held at an immigration detention center in Mexico City after winning a court reprieve that could lead to a weeks- or even months-long legal process in Mexico.

“We’re not concerned at this point,” Anderson told reporters.

“While the public may not like what she did, may not agree with what she did, or may have strong feelings against what she did, make no mistake — Tonya did not violate any law of the State of Texas and she is eager to have her day in court,” lawyers Stephanie K. Patten and Steve Gordon said.

Patten did not immediately respond to calls Thursday seeking comment.

He received only probation after a defense expert argued that Couch had been coddled too much by his wealthy parents, a condition the expert called “affluenza.” The condition is not recognized as a medical diagnosis by the American Psychiatric Association, and its invocation drew widespread ridicule.