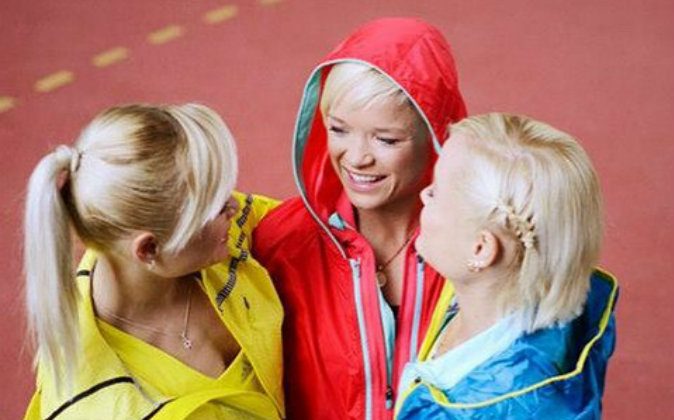 Estonian ‘Rio Trio’ First Ever Triplets to Run in the Olympics

The Luik triplets, also known as the “Rio Trio,” have beaten every female runner in their nation, qualifying for the upcoming Rio Olympics.

“We are the first triplets who are going to the Olympics,” Leila, Liina, and Lily Luik told Epoch Times in an email.

According to NBC Sports, a nation may enter no more than three athletes in an Olympic marathon—which is lucky for the Luik family, and Estonia, the country they repesent.

They are also the only Estonians to have met the Olympic women’s marathon qualifying time of 2:45:00.

“We think when we are really there and together on the start line, then we will realize what we have achieved, but of course we are very happy and satisfied that we are almost there and doing what we have dreamed since we started running as professionals,” Leila said.

The trio trained for the Olympics almost every day. In the morning their two-and-a-half hour training is much more intense than it is in the evenings, they said. But they do get plenty of rest time, “We try to rest a lot during trainings,” Lily said.

When asked who is the fastest runner, Lily said Leila is. “She holds the fastest marathon record—2.37.12, but Liina hold fastest times in shorter distances like half marathon, 10K, 5K and 3K.”

Nonetheless, she said, though they compete with each other, they support each other as well. On the track, “We run as fast as we can,” Lily said, but mentally, “We are more with each other.”

Leila told Epoch Times that the three of them started running late—six years ago, “and marathon was the easiest way to get somewhere and to compete with other runners,” she said.

Since childhood, they have done all of the same things, “and we have the same taste and hobbies,”—like running. “It’s clear that when one of us started running, two followed, and we all started to love it,” Liina said.

According to Lily, sometimes in other races, they would often finish together, but Leila said, everybody wants to be first, adding “We [wish] each other the best during the competition, no matter what, who is first or third. We are happy for everyone and if one of us wins, it means all sisters won.”

Liina said that Leila and Lily had taken exams for one another, “And we have had some times when one sister is pretending to be another and went to a meeting or party, when the real sister couldn’t go.”

They describe themselves as “positive and happy people” and said that they try to live life positively. “Sometimes we argue with each other—this happens mostly when a sister takes another sister’s clothes, or some other things, without asking, then we get little bit upset, but we always get over it,” Liina said.

In the end, they just want to give it their best shot and represent their country, “and also to see and meet the other sportsmen and women to get inspiration and motivation and good ideas for the future,” Lily said.

When the Luiks’ are not running (which is hardly ever because they are training) they are “dancing and eating ice-cream and laughing,” Lily said.

Other than their physical appearance, their hobbies, or their favorite foods, the triplets also have similar mottos, which is “To be a champion you have to live like a champion—train, eat, and rest, forget everything that is negative, and only focus on making your dreams come true.

“Whats motivate us—good results, giving each other support, doing what you love and knowing that dreams can in fact, come true,” they said.