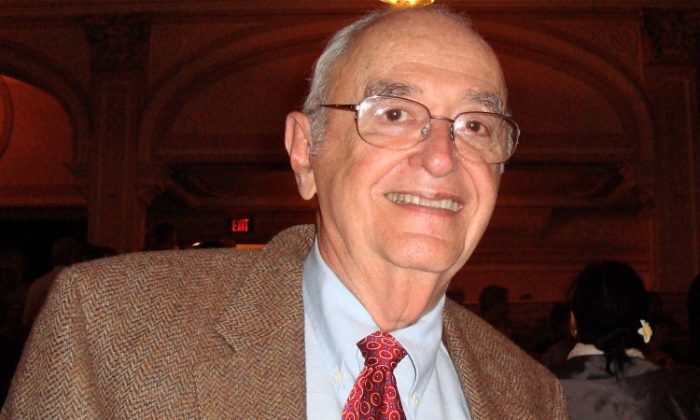 “The dancing is wonderful,” said Dr. Baum, who has many awards and honors and was formerly chairman of radiology at the University of Pennsylvania.

Involving complete fundamental trainings, a broad range of movements and postures, and “very difficult jumping and tumbling techniques,” classical Chinese dance, which is at the heart of a Shen Yun performance, “is one of the most comprehensive dance systems in the world,” explains the company’s website. Accompanying the dancers, who are adorned in handcrafted, colorful costumes, are a unique orchestra, award-winning vocalists, and digital backdrops.

“The music is great, the scenery is great,” said Dr. Baum’s wife.

Dr. Levin, professor emeritus of radiology at Thomas Jefferson Medical College, said “the beautiful choreography” struck him the most.

“It’s exciting, colorful,” he said. “It’s something that opens the door to another world.”

Shen Yun was formed after communist rule in China “all but destroyed” the ancient 5,000 year-old Chinese culture, according to its website, to revive this culture.

“Sophisticated dance techniques, an orchestra joining instruments East and West, beautiful costumes, and a stunning back drop—this is Shen Yun at first glance,” it states. “But digging deeper, one discovers a sea of traditional Chinese culture. Mortals and divine beings merge on stage as one. Principles such as benevolence and justice, propriety and wisdom, respect for the heavens, and divine retribution, all come to life, washing over the audience. Originating from Confucianism, Buddhism, and Taoism, these ideals are the essence of traditional Chinese culture.”

“When you are so engrossed in your own culture, you don’t see everything else,” said Dr. Del Valle. “Another world is getting out of your own culture and seeing another culture.”

Dr. Stanley Baum is America’s medical pioneer and visionary whose dedication to radiologic research and education was instrumental in the formation of the National Institute of Biomedical Imaging and Bioengineering. He has held the post as Chairman of the Department of Radiology at University Pennsylvania for more than 20 years.

David C. Levin, M.D.,professor and chairman emeritus of the Department of Radiology at Jefferson Medical College of Thomas Jefferson University, served as president of the Society of Chairmen of Academic Radiology Departments, Chairman of the Council on Cardiovascular Radiology of the American Heart Association, and on the editorial boards of six leading radiology journals. A world-renowned researcher and speaker in his field, he was awarded the Gold Medals (the highest honors) of the American College of Radiology, the Association of University Radiologists, the American Roentgen Ray Society. He was once a fighter pilot in the U.S. Air Force.

Shen Yun Performing Arts, based in New York, tours the world on a mission to revive traditional Chinese culture. The 2012 season concludes this month with performances in Philadelphia, Honolulu, San Antonio, and Buffalo.