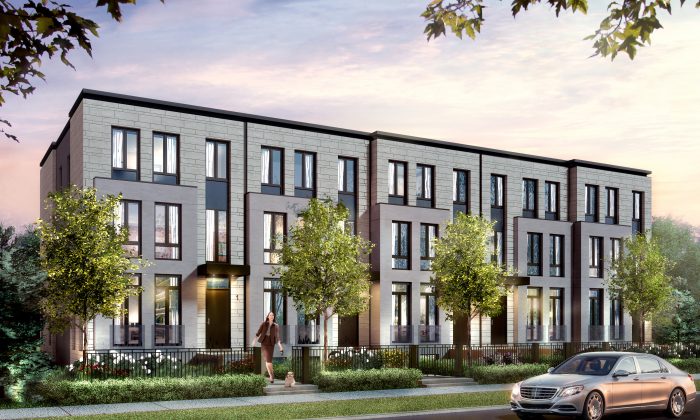 Toronto’s prestigious Bayview Avenue has always been synonymous with the “good life.”

In the past, Sunday outings for many families often meant a leisurely drive on the wide, tree-lined boulevard for a peek at “how the other half” lived in neighbourhoods with imposing names such as The Bridle Path and Post Road.

Although the community has been tweaked with new additions and architecture, the area’s reputation for lifestyle as well as quality homes remains intact.

Proof is found in the details of the Estates on Bayview, a high end project planned by Bazis Inc.

It’s the same developer which recently completed and sold out the iconic Emerald Park towers at Yonge St. and Highway 401.

That project’s arched, green glass sweeping at the top of the imposing structures is now a highlight of the North York skyline and one of the area’s most prestigious addresses.

And Veronika Belovich, VP of sales and marketing for Bazis, said the Estates on Bayview—to be located on the west side of Bayview Ave., south of Sheppard Ave. and north of York Mills Rd.—will be just as dynamic.

“It’s going to be quite dramatic,” she said “It will have everything … terraces, gardens, pools and—above all—good people.”

The project—located in what is geographically known as York Mills—consists of 20 freehold townhomes (all 3,500 sq.ft.) on 20 ft. x 100 ft. lots. The development is configured into four blocks each holding five homes.

“We expect to be attracting empty nesters and young families,” she says. “The retirees will be attracted to all the incredible shops, restaurants and activities that make up the fabric of the community.”

Belovich said the young families will also be impressed by the surrounding amenities but agrees that it’s often the top flight educational facilities—such as the nearby prestigious Crescent School—that help make that final decision.

Sales will begin in May and occupancy is projected for 2018 with prices ranging from $1.950 to $2.3 million. Ceilings on the main floor are 10 ft. with elite grade material used throughout. Parking includes two hidden spaces per home with all units capable of being fitted for elevators.

The homes will feature expansive outdoor terraces flowing into lavish backyards and, for the first time, buyers have the ability (through custom designers) to compose their own layout from existing composites.

“It’s possible to have as many as five bedrooms,” says Belovich.”This is your house … you’re in charge.”

She said it hasn’t been lost on Bazis that retirees will often have their children and grandchildren over for parties and overnight stays and that sometimes space is a necessity.

The outdoors is also “family friendly” with backyards designed to feature a small lap pool (if so desired) as well as space for a large garden. “A lot of people love their plants and flowers so there’s no need to stop a hobby just because you move,” says Belovich. “There’s room to barbecue, have a gathering and maybe even space for a hot tub.”

For a long time the York Mills community was indeed on the sleepy outskirts of the city with very little to do. But—fast forward to 2016—the enclave is now “in the thick” of it all, but without the crazy bustle.

The subway extension to Finch Ave. in the 1970s and the recent completion of the Sheppard line all the way to Don Mills Rd. has made travelling all over Toronto so much easier. The Estates on Bayview is just a few minutes from Highway 401 which connects with the southbound Don Valley Parkway and the northbound Highway 404.

And, despite all the added transportation features, a summer walk through the neighbourhoods in and around the Estates on Bayview show it’s still pedestrian friendly with kids on bikes, and moms and dads walking through the winding side streets.

The community is surrounded by plenty of green space lending itself to plenty of outdoor activities.

Sunnybrook Park, accessible off Bayview Ave., is a large expanse of land home to a multitude of bike trails, playing fields and dog parks. It’s a perfect spot for picnics, running and skating on a variety of frozen ponds in winter. There are even stables that offer riding lessons for the so-inclined.

The park includes 200-year-old trees, a pond and marsh area with a large variety of wild flowers, birds, and other wildlife.

It’s become a popular spot for picnics in the summer and cross country skiing in the winter. The park is also home to the York Mills Arena, which offers seasonal skating opportunities for all ages.

As well, the popular Edwards Gardens—one of Toronto’s prettiest and best known parks—forms the southern boundary of Windfields Park and is the perfect spot for that nice morning walk. Wilket Creek flows through the centre of this park which is known for its waterfalls, rose gardens, and rockeries.

Both The York Mills Shopping Centre and The Shops at Don Mills offer a wide range of restaurants, gourmet food shops and an enjoyable shopping experience. The area is dotted with a myriad of private health clubs as well as a very popular YMCA at the corner of Bayview and Sheppard Aves. But if you’re looking for something just a bit more upscale, there’s always the exclusive Granite club which has become an integral component of the neighbourhood.

Many of the area residents belong to the exclusive Rosedale Golf Club— a short drive from the new project—but many also enjoy the nearby Don Valley Golf course located at Highwy 401 and Yonge St.

Yes, there’s plenty of fun to be had at the new Estates on Bayview, but there is also a serious side.

A variety of junior and senior level schools, including York Mills Collegiate, Toronto French Montessori, Havergal College, Toronto French School, York University (Glendon College,) and Brebeuf College School will all be accessible to residents of the Estates on Bayview.

Health care is nearby at the Sunnybrook Health Centre or a quick drive to North York General at Sheppard Ave. and Leslie St.

For more information and to register visit www.bazis.ca.