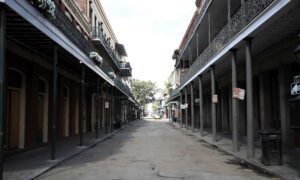 The Cities Where Taxpayers Will Get Shorn
0 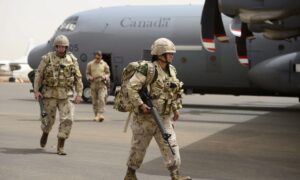 Foreign Aid and the Price of Canada's Virtue Signalling
0 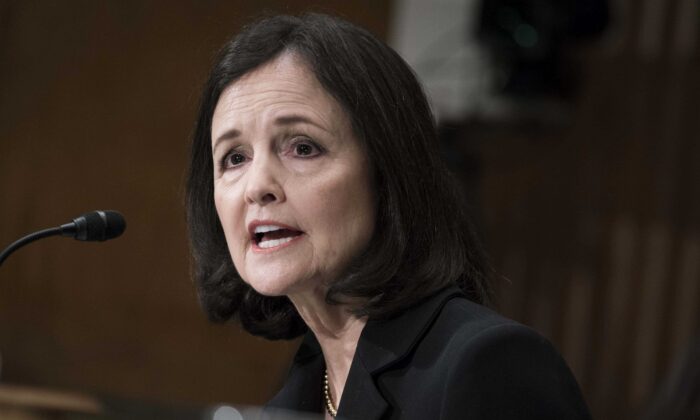 Judy Shelton testifies before the Senate Banking, Housing and Urban Affairs Committee during a hearing on her nomination to be member-designate on the Federal Reserve Board of Governors, in Washington, on Feb. 13, 2020. (Sarah Silbiger/Getty Images)
Viewpoints

Establishment Criticism of Fed Nominee Shelton Is Badge of Honor

A former Federal Reserve employee made an astonishing admission in January. Adam Posen—who holds a Harvard University doctorate and worked at the New York Fed in the 1990s—said what the Fed fears most isn’t inflation or another recession.

No, it’s a reopening of the Federal Reserve Act.

The Fed needs its wings clipped, especially its dual mandate, but the name of its game is self-preservation. The Fed banking cartel wants neither scrutiny nor disruptive personnel that might catalyze a legislative overhaul.

By some providence, in steps Judy Shelton, one of President Donald Trump’s nominees for the Fed’s board of governors. While delayed for many months, Shelton’s progression through the Senate Banking Committee occurred on July 21.

Sens. Mitt Romney (R-Utah) and Susan Collins (R-Maine) have publicly signaled they will vote against her, citing concerns over her independence. Assuming uniform Democratic Party opposition, this places her approval on a thin majority of 51.

More than a year has passed since her nomination, so critics have had time to pile on, and boogeyman insults have reached fever pitch. As she awaits confirmation, The New York Times has published an op-ed from an Obama administration official: “God Help Us if Judy Shelton Joins the Fed.”

Could she get a better endorsement?

With the exception of a Wall Street Journal editorial, denunciations have flowed from influential outlets such as The Economist. Catherine Rampell, writing for The Washington Post, called her a “professional crank,” and Karl Smith, writing for Bloomberg, wants her confirmation delayed until 2021.

In contrast, many economics-oriented blogs and policy institutes open to reform have offered favorable perspectives. They include the Alt-M project of the Cato Institute and the Mercatus Center at George Mason University.

What Is So Scary?

Co-editor with Alex Chafuen of the 2012 book, “Roads to Sound Money,” Shelton has the academic acumen and the advocacy record to scare the life out of Fed officials and beneficiaries. Her pleasant, patient demeanor also leaves her hard to demonize and wrong-foot.

Along with predictable name-calling, Shelton’s opponents have hurled two chief criticisms: (1) she is outside the mainstream, and (2) she has opposed the Fed’s existence. There’s a grain of truth in both, but they may actually be strengths. They stem from her sympathies for a gold standard and pegged exchange rates.

In 2019, she made the case in The Wall Street Journal for a new monetary regime.

Shelton completed her doctorate in business administration at the University of Utah. Since then, much of her work has been with think tanks and in the private sector rather than the Ivy League old-boy network. Her writing on banking and economics, however, is substantial.

Whether she’s outside the mainstream is difficult to say, since economics is a fragmented field with distinct traditions and subdisciplines.

She’s undoubtedly independent in her thinking and willing to express her ideas. She has also challenged the merits of established institutions such as the Federal Deposit Insurance Corp. Only in the eyes of regime apologists are these bad attributes.

Consider that the Fed has used immense clout to contaminate and tilt the profession in its favor. An article in Econ Journal Watch (EJW), a peer-reviewed journal on economics research and the profession, noted in 2005: “74 percent of the articles on monetary policy published by U.S.-based economists in U.S.-edited journals appear in Fed-published journals or are co-authored by Fed staff economists.”

More recently in EJW, Nicholas Curott and colleagues documented a “government-cheerleading bias in money and banking textbooks. … Textbook presentations leave out important historical details or present them in a way that systematically favors one view over another.” There’s a disparity between economics literature and what appears in popular economics. The latter leans toward interventionism, which empowers a central bank.

Robert Murphy, an economist with the Mises Institute, makes light humor of the upside-down world one perceives from the self-appointed economics establishment: “[Sheldon] thinks the Fed’s 2 percent (price) inflation target erodes your property rights. Can you imagine?!”

Shelton has dared to question the Fed’s benevolence and omnipotence. Such sacrilege isn’t supposed to see the light of day. Even if her power on the board would be limited, her capacity to open the debate would be historic—akin to Ron Paul’s presidential candidacy, which inspired many to read his 2010 book, “End the Fed.”

Shelton threatens the great enabler: money-printing for the bloated, debt-driven federal government. While the debt ceiling is little more than a gesture, limits on central-bank money creation would put a swift halt to profligacy. Washington would have to rely on either taxation or direct borrowing, as opposed to monetization.

Even free-banking economists such as George Selgin have admitted a return to a gold standard would be a Herculean task. Given its near impossibility via top-down implementation, market-friendly economists at the Mercatus Center seek stable money via clear rules. Nominal GDP targeting, they contend, “is one realistic way to do the sort of rules-based monetary policy that gold standard advocates want.”

Perhaps Fed insiders and apologists sense their impending irrelevance and obsolescence. Even bringing underlying interest rates to zero no longer stimulates the economy. Rather, it inflates the stock market and leaves Fed officials, whose legitimacy is dwindling by the day, desperate for more ways to inject liquidity.

Not only do they fear legislative change, they realize cryptocurrencies are rising like the tide. As people turn to private currencies and conduct transactions without intermediaries, Fed bureaucrats have less control over the economy. The Bank of Canada has already unwittingly admitted this vulnerability.

Shelton’s nomination, although largely symbolic, is a symptom that change is coming. Be it via legislation, creative destruction, or both, it’s for the better.