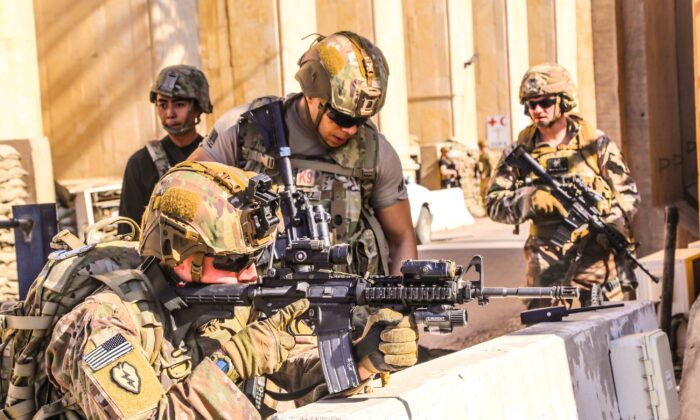 Esper: ‘There’s Been No Decision Whatsoever to Leave Iraq’

No decision has been made to leave Iraq, Secretary of Defense Mark Esper said on Jan. 6, drawing heightened scrutiny to a letter reportedly sent to Iraqi lawmakers from the U.S. military that signaled a withdrawal.

“There’s been no decision whatsoever to leave Iraq,” Esper told reporters in Washington.

Staff members are “trying to figure out” what the letter is and “there are no plans to leave,” he added. “There has been no decision made to leave Iraq, period.”

Gen. Mark Milley, chairman of the Joints Chiefs of Staffs, told reporters that the letter was real but that it wasn’t meant to be released. “That letter is a draft, it was a mistake, it should not have been released,” he said.

Milley said the draft was poorly worded and wasn’t signed.

“Sir, in deference to the sovereignty of the Republic of Iraq, and as requested by the Iraqi Parliament and the Prime Minister, CJTF-OIR will be repositioning forces over the course of the coming days and weeks to prepare for onward movement,” read the letter. “During this time, there will be an increase in helicopter travel in and around the International Zone (IZ) of Baghdad. We respect your sovereign decision to order our departure.”

A Department of Defense spokesperson told The Epoch Times before Milley and Esper spoke that they were “still tracking down the letter.”

The Iraqi parliament passed a resolution over the weekend to expel foreign troops after Prime Minister Adil Abdul-Mahdi called on members to act.

“The government commits to revoke its request for assistance from the international coalition fighting [the ISIS terrorist group] due to the end of military operations in Iraq and the achievement of victory,” the resolution read. “The Iraqi government must work to end the presence of any foreign troops on Iraqi soil and prohibit them from using its land, airspace or water for any reason.”

Resolutions, unlike laws, are non-binding.

About 5,000 American military personnel are in Iraq, which has found itself caught between Iran and the United States. The parliament was reacting several days after a U.S. airstrike took out Iranian General Qassem Soleimani in Baghdad.

President Donald Trump threatened on Sunday to impose harsh sanctions on Iraq if lawmakers there forced U.S. troops to leave.

“If they do ask us to leave, if we don’t do it in a very friendly basis, we will charge them sanctions like they’ve never seen before, ever. It’ll make Iranian sanctions look somewhat tame,” he said.

“We have a very extraordinarily expensive air base that’s there. It cost billions of dollars to build. Long before my time. We’re not leaving unless they pay us back for it.”