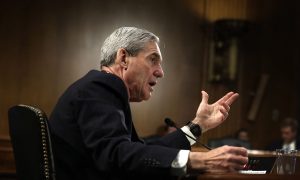 Mueller Team's Wiped Phones and the Accountability Crisis in Government
0 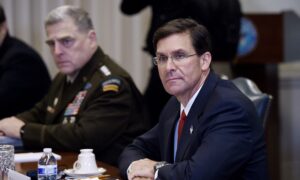 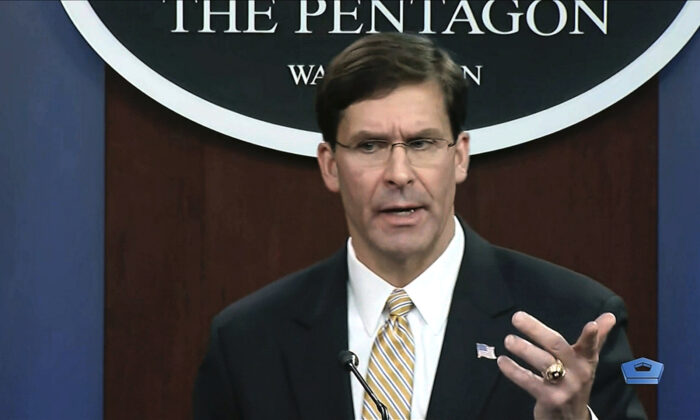 Secretary of Defense Mark Esper talks to the press on Iran and Iraq at the Pentagon in Washington on Jan. 7, 2020. (divids via AP)
National Security

Defense Secretary Mark Esper says the Pentagon plans to have more than 500 Navy ships in its fleet by 2045 to counter China’s growing military ambitions and other threats.

Esper mentioned the objective while outlining a broader naval force roadmap, dubbed “Battle Force 2045,” in remarks at a virtual event on Oct. 6 hosted by the Center for Strategic and Budgetary Assessments think tank in Washington.

“Battle Force 2045 calls for a more balanced Navy of over 500 manned and unmanned ships,” Esper said, adding that he envisions support to naval operation from unmanned aircraft “of every type,” including refueling, electronic warfare, and airborne early warning.

“The Chinese Communist Party … intends to complete the modernization of its armed forces by 2035 and to field a world-class military by 2049,” Esper said. “At that time, Beijing wants to achieve parity with the United States Navy, if not exceed our capabilities in certain areas and to offset our overmatch in several others.”

“Further, we will reach 355 traditional battle force ships prior to 2035, the time at which the PRC aims to fully modernize its military. And most importantly, we now have a credible path for reaching 355-plus ships in an era of fiscal constraint,” Esper added, referring to China by its official acronym.

He said in a tweet that the Pentagon plan proposes a future fleet “that optimizes 1. distributed lethality & awareness 2. survivability in a high-intensity conflict 3. adaptability for a complex world 4. ability to project power, control the seas, & demonstrate presence 5. deliver precision effects at long range.”

Esper just wrapped up a 5-day, four-country tour of the Mediterranean and North Africa over the weekend. Before he left, he singled out China and Russia for what he called “destabilizing actions on the continent.”

Esper’s “Battle Force 2045” plan also calls for an expanded and “more capable” submarine force of between 70 and 80 vessels, up from today’s approximate 55.

“If we do nothing else, the Navy must reach production of three new Virginia-class subs per year,” Esper said.

He also called for between eight and 11 nuclear carriers, which he called “our most visible deterrent,” along with up to six light carriers that will support short-takeoff or vertical landing aircraft.

The plan calls for between 140 and 240 unmanned and optionally-manned surface and subsurface vessels, between 60 and 70 smaller surface attack boats, and between 70 and 90 combat logistical support ships.

“We are now at the point where we can—and indeed we must—chart a new path to a future fleet that will maintain our naval superiority long into the future,” Esper said.

“Today, cutting edge technologies are fundamentally altering the character of warfare and expanding the geometry of the battlefield in multiple ways,” he said. “In the maritime domain, artificial intelligence, autonomous systems, ubiquitous sensors, and long-range precision weapons will play an increasingly leading role in a future high-end fight.”

Esper said that whoever harnesses these technologies first will have a clear advantage “for years to come.”