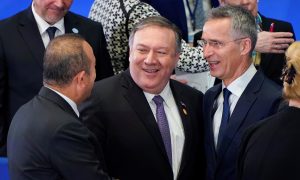 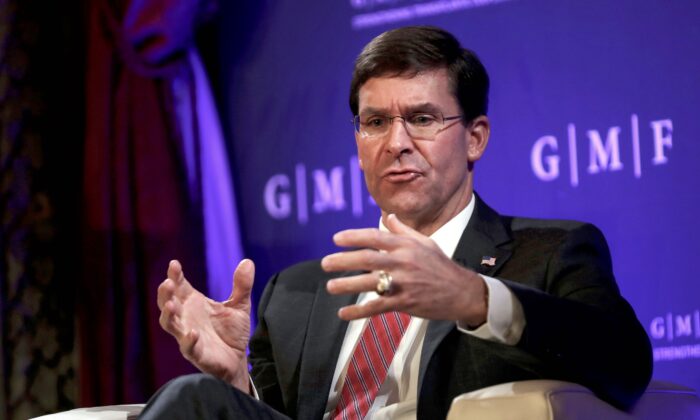 U.S. Secretary for Defense Mark Esper gestures as he speaks during a panel discussion at the Concert Noble in Brussels, on Oct. 24, 2019. (FRANCISCO SECO/POOL/AFP via Getty Images)
US News

U.S. Secretary of Defense Mark Esper during his trip to Middle East and Europe spoke at the German Marshall Fund event in Brussels, Belgium. He had sharp words for Turkey over its incursion into Syria. A large portion of his speech was also devoted to calling European NATO allies to recognize the security threats from communist China and Russia, urging them to actively participate in countering them.

Esper started his trip on Oct. 19 and visited Afghanistan, Saudi Arabia, and Iraq.

In Brussels on Oct. 24, Esper described threats to rules-based international order in the Middle East. He mentioned the Taliban in Afghanistan that continues to attack innocent civilians, the Islamic regime in Iran that “presents a persistent threat to … partners in the region,” and “Turkey’s unwarranted incursion into northern Syria … jeopardizes the gains made there in recent years.”

He cautioned against “new threats on the horizon that we ignore at our own peril.”

These threats have emerged alongside technological advancements. Artificial intelligence, hypersonic weapons, and directed-energy weapons are all used in modern warfare and have “increased the lethality of modern weapon system[s].”

Esper said that the National Defense Strategy of the United States prioritizes China as the first threat and Russia as the second. This due to these two countries policies “to reshape the world to their favor at the expense of others through predatory economics, political subversion, and military force.”

As an example, Esper pointed to China’s One Belt One Road (OBOR) initiative.

“China’s One Belt One Road initiative has left several nations with unsustainable debt, forcing them to trade sovereignty for financial relief. Even developed nations fear China’s growing leverage which not only impacts their economic and political decision but perhaps worse, leads them to make sub-optimal security choices,” Esper said.

Communist China uses debt traps created through OBOR to obtain rights to operate strategic ports and terminals. In 2017, Sri Lanka fell into such a trap. As it could not pay its debt to China, the country was coerced to sign a 99-year lease with a Chinese company for use of its Hambantota Port.

Esper said he would convey a message to NATO allies that “every member must contribute its fair share to ensure our mutual security and uphold the international rules-based order.”

He said that currently, only eight members spend 2 percent of their GDP on defense as per the agreement reached by all NATO members in 2014. Half of the members took actions to achieve this goal but a number of members are “falling short,” according to Esper.

Esper also advised NATO allies: “If Huawei becomes a provider of choice … it is going to seriously undermine our ability to share intelligence, our ability to interoperate militarily, because we simply cannot trust those networks.”

In response to a question about Turkey’s recent incursion into Syria, Esper said, “Turkey put us all in a very terrible situation.

“I think the incursion was unwarranted. I think President Erdogan was fixated on making this incursion for one reason or another, and that was not a possibility that we were going to start a war with a NATO ally … who has been a very good ally since joining the Alliance in 1952.

“On any number of issues, we see them [Turkey] spinning closer into Russia’s orbit than in the Western orbit.

“I think we need to work together to strengthen our partnership with Turkey,” Esper said.