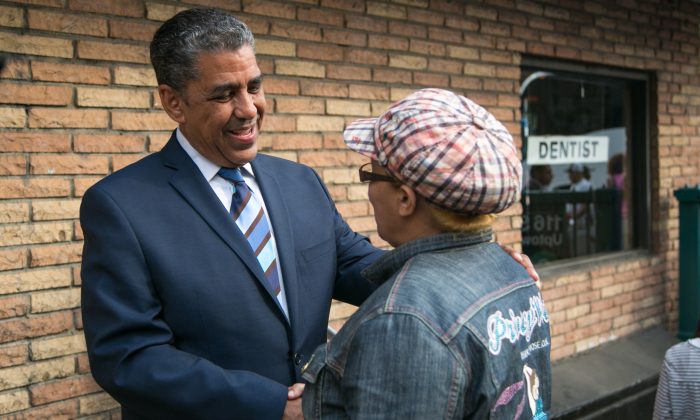 NEW YORK—On the day before Tuesday’s primary, trailing behind incumbent Congressman Charles Rangel by double digits in the polls, state Sen. Adriano Espaillat had to make every minute of campaigning count.

His Monday itinerary was a panorama of the 13th District’s geography and demographic. After starting his day with a television appearance on “Good Day New York” ahead of Rangel, Espaillat shook hands with passersby at a subway station in West Harlem, then finished his morning with a visit to the Van Cortland Jewish Senior Center in Kingsbridge Heights, Bronx.

“It’s a different district, it goes all the way up to Gun Hill Road in the Bronx now,” said Espaillat, referring to the redrawing of the congressional district in 2012. “[Rangel’s] disconnect with the district is a factor,” he said.

Rangel played up his extensive experience, drawing an analogy he’s used many times during his campaign.

“This is not the time to start understanding what Congress is all about,” Rangel said, “If you had an old horse that kept winning races and bringing back the grand prize, why would you change him for someone who doesn’t even know what a track is?”

Rangel did not have any campaign stops in the Bronx on Monday, choosing instead a graduation at the Harlem Link charter school and Bethel AME Church, both in Harlem.

Espaillat proceeded to an elementary school in the heavily Dominican neighborhood of Washington Heights in the early afternoon and finished the day rallying his base in heavily Hispanic East Harlem. If he is elected, Espaillat would be the first Dominican borne congressman.

A Siena College poll of 708 likely primary voters June 14–18 had Rangel with a 13-point edge over Espaillat. Despite this, Espaillat said on Monday that he was “very optimistic” about Tuesday’s primary.

“I was polled last Saturday and I began to speak in Spanish as I am fully bilingual, and the person couldn’t understand what I was saying,” he told a crowd gathered at the entrance of P.S. 189 Monday afternoon. “Minority communities are traditionally not polled accurately,” he explained.

Jesse Campoamor, Espaillat’s campaign manager, was similarly confident, saying that more than 23,000 have pledged to vote for Espaillat on Tuesday, 4,000 more than the number of votes Rangel received in the 2012 primary.

Campoamor also noted that the Siena poll was conducted before the New York Times endorsed Espaillat on June 19, which he said may tilt the sizable white vote in Espaillat’s favor.

Also running in the primary are the Rev. Michael A Walrond and Yolanda Garcia, both of whom currently poll in the single digits.

One of the biggest challenges Espaillat faces is that many voters simply aren’t familiar with who he is and will opt for Rangel by default, despite their dissatisfaction with the incumbent.

Lucy Degidon was painting in the games room of the Van Cortland Jewish Senior Center when Espaillat made a surprise visit there. Degidon is determined to vote Tuesday, although she hasn’t yet decided on the candidate. She’s leaning toward Rangel, still under the impression that the 22-term congressman still holds considerable sway in Congress.

“I’m not really a big fan of Rangel but I know he has seniority and when you have seniority you can be on committees and get things done,” she said. “I worry that when you vote for a new person, without seniority, whether they will have a pull as far as the different issues that come up.”

Rangel was censured over ethics violations in 2010 and, having stepped down from his chair of the powerful Means and Ways Committee, is currently not sitting on any committees.

Degidon said after Espaillat’s visit that she was more inclined to vote for Rangel’s challenger after hearing him promise to open a district office in the Bronx “on day one” of his term.

“He would have an office in our district, which we don’t have right now—to go there and speak to him and bring up issues—we have a lot of senior issues here,” she said.

Espaillat has repeatedly painted Rangel as a politician out of touch with his community; on the last day of his campaign, his rhetoric reached a boiling point.

“This is Washington versus Main Street; the Washington elite may have ideas on what should happen here,” said Espaillat, adding that he had the support of local officials like Jeffrey Dinowitz, “That’s why I’m going to win tomorrow.”

Dinowitz is the New York state assemblyman representing the 81st District, which covers large swathes of the Bronx. The 13th Congressional District also covers part of the Bronx including the senior center Espaillat visited.

Later at a Rangel campaign stop, Espaillat’s campaign manager painted Rangel as someone estranged from his own constituents, using the congressman’s own words on Monday afternoon as an example of his disconnect.

After receiving an endorsement from the green taxi drivers Monday, Rangel fielded questions from reporters and concluded his stop with a ringing condemnation of the tea party movement.

“The tea party has so infected the Republican Party in the House that there is a growing movement among the Republicans to cut this cancer away from them,” Rangel said.

Campoamor framed Rangel’s diatribe as the smoking gun of his disconnect with the people of his district.

“He spent a lot of time talking about the tea party,” he said, “I wonder if he’s talked to some of the constituents here and ask what are their major issues, what they’re struggling with on a day to day basis. Are they going to say whether the tea party is one of their concerns right now?”

He added that New Yorkers are struggling with rent increases and finding jobs that provide a living wage, an issue Espaillat had addressed earlier Monday.

“I am calling on the Rent Guideline Board to have a rent freeze for New Yorkers,” he said. “This is a crisis.”

Despite weeks of grueling campaigning, Espaillat said that he won’t rest until after the primary results are released.