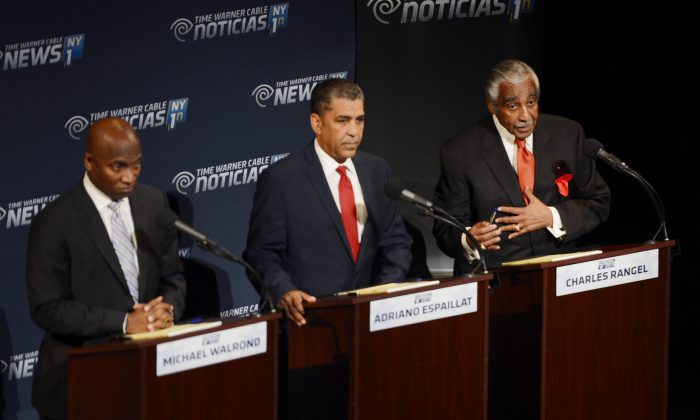 NEW YORK— Adriano Espaillat and incumbent congressman Charles Rangel had harsh words for each other during the one-hour debate at Brooklyn’s Lehman College, despite few disagreements on substantive issues.

Espaillat is challenging Rangel, who has been in elected office for 22 terms, in the congressional primary for New York’s 13th district.

Also running in the Democratic primary is Michael Walrond, a pastor with no history of political office, who played up his lack of experience in politics as an asset.

Both Espaillat and Rangel are heavily in favor of immigration. Espaillat has made his pro-immigration stance a major part of his campaign and has criticized Obama’s record number of deportation of immigrants.

“I want to work with President Obama, I want to tell him my life story, and convince him, persuade him that it’s a failed policy,” Espaillat told the crowd at Lehman, referring to deportations.

At the same time Rangel’s pro-immigration stance in Congress has earned him an A grade from major immigration groups.

Yet Espaillat blamed Rangel for the failure of the 2013 Senate immigration reform bill to become law, touting his own success in getting in-state tuition for immigrants in New York during his tenure as state senator.

Rangel fired back, reminding the crowd that the DREAM Act, which could offer a path to citizenship to select immigrants who entered the United States illegally as children, failed to pass in the New York legislature this year under Espaillat’s watch.

Rangel and Espaillat both want to make housing more affordable.

When asked by the debate moderator what single issue the candidates wanted to be known for, Rangel’s answer was his history as “a tenants advocate who renewed rent-stabilization laws.” Espaillait is likewise supportive of rent-control laws, proposing to expand them to cover commercial businesses.

“I support binding arbitration, where small businesses and landlords can go before an arbiter, and they can decide the market value of rent,” said Espaillat.

Espaillat dug into Rangel’s congressional history for dirt, attacking Rangel’s vote to modify the Glass-Steagall Act in 1999 as enabling big banks to profit at taxpayers’ expense. This drew a fierce response from the congressman, who told Espaillat to “Google” the issue and leave such a complex matter to experts.

Although the debate was heated, the tone remained civil throughout.

Espaillat wished Rangel, who was born on June 11, 84 years ago, a happy birthday at the beginning of the debate.

The primary election is on June 24th.