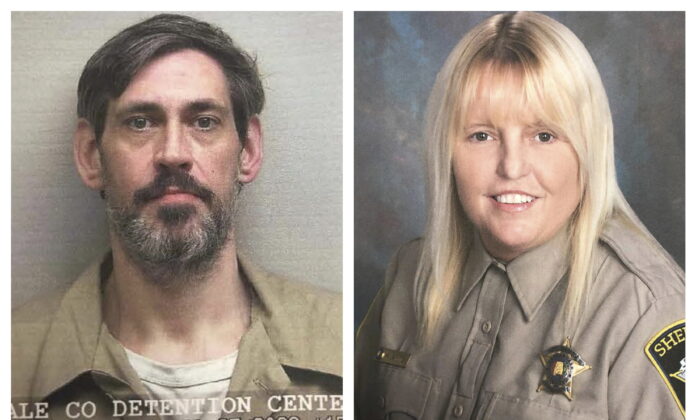 Alabama corrections officials Vicky White, who was accused of helping a murder suspect escape, likely shot herself as law enforcement officials approached her vehicle in Indiana, and the two were prepared for a shootout with law enforcement, according to a sheriff.

Vanderburgh County Sheriff Dave Wedding told reporters on Tuesday that the woman, who was later pronounced dead, shot herself before police were able to capture her and take her into custody. Wedding also said that Alabama fugitive Casey Cole White was allegedly planning to engage in a shootout with police if his car hadn’t been rammed by law enforcement.

An AR-15 rifle and several 9mm pistols were recovered from their vehicle, he said.

Casey White told police that he was “probably going to have a shootout,” adding that “their plan was pretty faulty … and it failed,” Wedding told reporters. What was “going through” Vicky White’s mind, “I have no idea,” he added.

“The female suspect shot herself, and the male suspect gave up when we approached the vehicle,” Wedding said, adding that “life-saving measures” were carried out. Vicky White was later pronounced dead after being rushed to a nearby hospital, he confirmed.

Officials preliminarily “believe that she may have taken her own life, but we will wait until the coroner’s office examines the body to make a confirmation,” he told CNN. Meanwhile, Casey White was booked into the Vanderburgh County Jail early Tuesday and is expected to be extradited to Alabama.

Casey White, 38, surrendered without a fight, and told officers that he didn’t kill the woman he called his wife, according to The Associated Press. It’s not clear if the two got married after their escape, but Wedding told reporters that the two were not married.

Authorities conducting surveillance saw Vicky White exiting an Indiana hotel Monday with a wig on, U.S. Marshal Marty Keely told CNN, adding that they saw Vicky White and Casey White getting into a car and driving away. Then, law enforcement engaged in a vehicle pursuit, which ended with a U.S. Marshalls task force member driving a vehicle into their vehicle. Their car crashed and rolled over, officials told the outlet.

“The pursuit was very short. It went up a major artery here in Vanderburgh County and they cut across a parking lot at a large factory. They were in a grassy area so three of our task force members actually rammed the vehicle, pushed it into a ditch so it ended up on its side. As they approached the vehicle it was obvious that the female driver was unconscious and still had a weapon in her hand. And they removed the murderer from the vehicle simultaneously,” Wedding said.