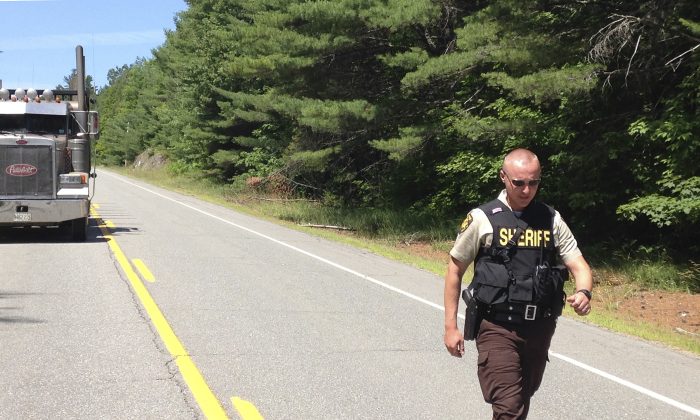 A Penobscot County Sheriff deputy walks along a road at a checkpoint Friday, July 17, 2015, in Lee, Maine. (AP Photo/Alanna Durkin)
Crime and Incidents

KITTANNING, Pa.—Police searched Friday for an inmate they say walked away from a work-release program while serving jail time for a probation violation, killed an acquaintance who lived nearby, then took off in a stolen truck.

Robert Crissman, 38, escaped from the Armstrong County jail on Thursday morning while delivering meals to other inmates, authorities said.

“He has to be considered extremely dangerous,” District Attorney Scott Andreassi told reporters.

The body of Tammy Long, 55, was discovered Thursday afternoon at a home about a mile away from the jail in Kittanning, which is 40 miles northeast of Pittsburgh. Police did not say how she was killed; an autopsy was scheduled for Friday.

Long and her boyfriend, Jerry Slagle, knew Crissman but were unaware he’d just escaped from jail when they let him inside, officials and a neighbor said.

“They only knew him as a friend,” Andreassi said. “They didn’t even know he was in jail.”

Slagle found Long dead and his truck missing when he got home at about 2:45 p.m., Andreassi said. Officials believe Long was killed after Slagle left for work around 7:30 a.m.

Crissman was last seen driving Slagle’s maroon 1999 Chevrolet Silverado extended cab pickup truck. It has a carpenter union sticker on the back window and a Pennsylvania license plate. Authorities were trying to figure out if Crissman had taken any guns from the house.

The 5-foot-9, 150-pound Crissman escaped around 6:30 a.m. Thursday. He walked outside to get the meals from a truck and took off, Sheriff William Rupert said.

“The doors were open so he could carry in meal trays, and he just walked away,” Rupert said.

Crissman had been in jail since July 24 for violating probation on a drug charge. There were no violent crimes on his record and he was trusted by staff, officials said.

Barry Crytzer said he hired Crissman off and on over the past year as a handyman performing yardwork and maintenance.

“He was a very nice guy,” Crytzer told the Pittsburgh Post-Gazette. “This all seems really out of character from the guy I knew. He seemed like a pretty passive guy.”