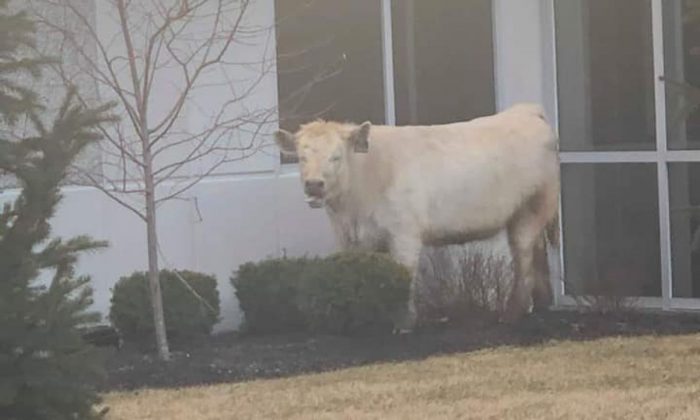 A cow that temporarily halted traffic in Noblesville, Indiana, on March 16, 2019. (Noblesville Police Department via Facebook)
US News

Escaped Cow Stops By Chick-fil-A While Chased by Police

A cow on the loose was chased around Saturday afternoon, March 16, by the local police department of Noblesville, Indiana, just a 40-minute drive northeast of Indianapolis.

The errant bovine was seen running around Hamilton Town Centre, a Simon-owned outdoor mall, and it even crossed a busy traffic-filled street to get to the Chick-fil-A on the other side.

“NPD was able to ‘run with the bulls’ last night,” the Noblesville Police Department (NPD) said in a good-humored Facebook post the next day. “We were chasing this running wild bovine all over the east side. If you got a picture of our cowboy adventure comment with it! We love to see it.”

Indiana resident Kristen Short was in her car when the cow crossed in front of her. She was able to capture some pictures of the cow as it walked across the road in front of her, a police vehicle visible in the background of one of the photos.

“Cow on the loose in Noblesville, we are dying laughing!!,” Short said in the post. “No one can catch it.”

She even got a picture of the cow standing by the Chick-fil-A restaurant after it successfully crossed the street.

Athena Hopkins, another Indiana resident, managed to film the cow crossing the street to the Chick-fil-A. The video quickly went viral after she shared it to her Facebook page, racking up over 800,000 views.

“So this just happened!!!! 🐮” Hopkins said in the post’s caption.

In the video, the cow trots across the street despite the busy traffic. A police car can clearly be seen following the cow before pulling over to the side of the road. As the officer exits the vehicle, the cow continues its journey at the mall.

“Somebody have a lasso or something?” she asks jokingly in the video.

Many people found it humorous that the cow ended up by the Chick-fil-A. One person joked “LMAO. He knows where it’s safe. He’s about to become their mascot!” while several people drew a comparison with Chick-fil-A’s “Eat Mor Chiken” ad campaign that involves cows advocating for the consumption of chicken.

In response to Hopkins’s video, the NPD said she “captured a hilarious moment” and thanked her for sharing the video.

Another Indiana resident, Rodney Heil, also posted a video to Facebook of the cow jumping down from a short wall before running along the sidewalk of Campus Parkway towards the I-69, while a man in a black jacket and jeans runs after it.

The NPD said nobody, including the cow, was injured during its adventurous escape. In response to a question on Facebook, they said they were able to successfully herd the cow back to the trailer of its owner.