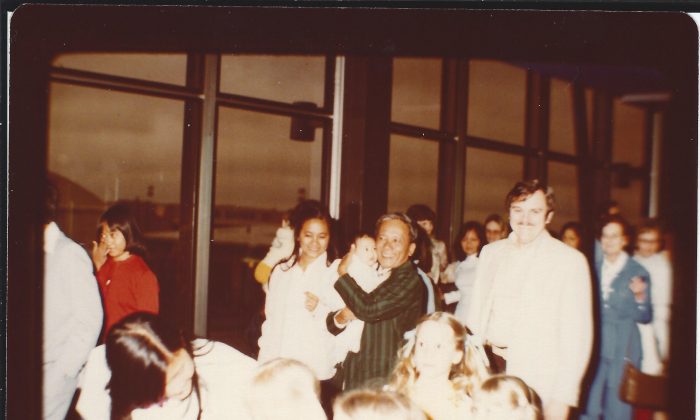 (provided by the author)
Inspiring the World Competition

The scorching sun beat down on the streets of Saigon as Tim Nguyen and his nine siblings ran errands for the family business. It was the 1960’s and Tim’s dad, Phat van Nguyen, owned a small Vietnamese general store that sold the essentials—rice and Coca-Cola.

Tim has pleasant memories of his childhood, attending school six mornings a week, playing with his brothers and sisters, and collecting customers’ empty Coke bottles at week’s end.

Save for his older brother, Tom, who ventured to the U.S. in 1972 to attend college, the entire Nguyen family lived in Vietnam.

“It was a simple life in Saigon,” recalls Tim. That simplicity was blasted, however, when the Communists took over in 1975, at which time the family lost touch with Tom due to disrupted mail service.

The Nguyens, who converted to Christianity in 1976, were unable to secure jobs due to their faith, and several of Tim’s older siblings were told to join a communist youth group to avoid being imprisoned.

After enduring nearly three years of living with scarce food, zero autonomy, and fleeting freedoms, Tim’s father made the bold move to attempt an escape. The first part of his plan involved relocating his wife and kids 300 km south of Saigon near the Tac Van River, a branch of the Mekong Delta River.

A Vietnamese friend gave Phat money to buy a 34 foot riverboat that was 5 ft. 5 in. wide and 4 ft. tall. Then, after selling all of their possessions, on Nov. 30, 1977, with nothing more than a walking compass and two five-HP engines (the size for a lawnmower), Phat loaded himself, his wife, his nine children, a daughter-in-law, and a cousin onto the boat and sailed down the river that would eventually lead them out to the South China Sea.

Tim, 13 years old at the time, had no idea that they were attempting an escape.

“Dad didn’t tell me or my younger siblings what we were doing because he didn’t want us talking to our friends and ruining the plan,” says Tim.

Prior to the escape, Phat bought sugar cane, bananas, and pineapples so that he could pass as a merchant to police patrolling the river. But his plan was nearly foiled when during that first night, their rudder got stuck in a fishing net strewn across the mouth of the river. Panic washed over Phat as he frantically cut away at the net, worried that authorities would stop to question him. Thankfully, they continued cruising.

“I imagine they didn’t think anyone was crazy enough to brave the ocean in that kind of ill-equipped craft,” says Tim, who describes the trip as a “suicide mission” since his father had no nautical experience, no fishing knowledge, and no life jackets or anchor on board. “Dad could no longer live in a communist regime. In his mind, we would all live together or die together. It was worth the risk.”

Before setting out, Phat administered Benadryl to his children to keep them quiet. When Tim woke up hours later, they were in the middle of the ocean in the pitch black dark of night.

A nasty storm blew in and waves crashed into the boat, knocking the lid off of the container that stored their drinking water, thereby contaminating it with saltwater. The travelers battled turbulent seas, high winds, motion sickness, and dehydration.

“We had no idea where we were going. We’d see birds and think land might be close but no,” says Tim. “We’d spot trash floating in the ocean and assume we were nearing land, but it was just passing ships dumping trash in international waters.”

One day a giant freighter cruised by them at full speed. The enormous wake generated from the monster vessel created 3- to 4-story high waves, pummeling the Nguyens’ small overloaded riverboat.

Daily, the family fought to stay afloat. In the absence of an electrical pump, all 13 passengers took turns, round-the-clock, bailing out water. “It felt like a futile task as every time we dumped a pail of water, another half-gallon would splash back in.” But the truth is, bailing served to keep them from sinking. Because when they were ultimately rescued by a Thai fishermen, within minutes of boarding the fishing boat, their tattered vessel to freedom disintegrated before their eyes.

Once the 13 weary passengers were dropped on the shores of Thailand, they found shelter at a refugee camp where they were greeted with rice soup and fireworks.

“Dad told us that the colorful, booming sky was the Thai people welcoming us,” says Tim. “Later we found out it was the king’s birthday.”

Though the Nguyens escaped jail time for entering the country illegally, they still suffered during their five-month stay in the dirty, overcrowded, camp. For starters, they were provided rice but no meat or vegetables. In addition, sometimes the Thai guards got drunk and beat the refugees.

While there, however, the family learned to speak English and how to assimilate to society in the United States.

Ultimately, the Nguyens arrived in the U.S. in May 1978. Thanks to connections Phat had made with an old friend, Robert Jackson, they reunited with the eldest brother Tom. In addition, Jackson arranged for Upland Evangelical Mennonite Church in Upland, Indiana to help the Nguyens secure housing and furniture. The church also paid the family’s expenses for six months.

After graduating from high school in 1982, Tim moved to Indianapolis. In 1986, he formed PC-COM, a computer shop he runs with his wife Ana and his brother-in-law that specializes in computer sales and services catering to both business and home use.

Tim and Ana have two daughters and a son. Andrea just graduated from Marian University and now works as an accountant, Vincent is a sophomore at Purdue University, and Danielle is a freshman at Avon High School.

Thanks to his dad’s faith, bravery, and determination, a new generation of Nguyens are living the dream of happiness, hope, and humanity.