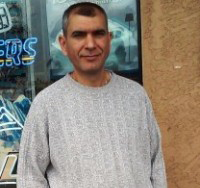 Leo outside his store.
News

Susannah Morgan
"Life is what happens when you're busy making other plans," said John Lennon. I was always a writer in my own head and seriously considered reporting from a war zone, but life happened - a husband, three kids and a job - so I wrote when I could. I managed two published novels, now on amazon, wrote a newspaper column for several years in Nevada and have written profiles of people living on California's Central Coast for an online paper. I love people; writing their stories is a privilege.
View profile
Follow
biggersmaller
Print

The term, Genocide has been defined as: the systematic extermination or attempted extermination of a national, racial, religious or ethnic group. Iraq has been the backdrop for Genocide of one kind or another for a quarter century.

For 35 years, Saddam Hussein ruled Iraq with threats and acts of inconceivable violence. Most of the 150 tribes in the country were subjugated by Hussein in an unstable alliance built upon fear of reprisal. He was noted for slaughtering any group he felt was against him.

This tribal alliance fell apart after the second Gulf War in 2003 when the defeat of Hussein removed the threats. Centuries old Arab tribal doctrine puts the tribe first and any government an extremely distant second. Until the advent of IS, the extremist Islamic State, the tribes had no reason to band together to support the Iraqi government.

Today, more and more tribal leaders are engaging in the fight against IS which has recruited fighters from other countries  who are not members of any Iraqi tribe. Meanwhile, previously protected religious minorities like the Mandaeans, the Chaldean Catholics, and Assyrian Christians, all with a non-tribal history in the country dating back thousands of years, have been the victims of an ongoing genocide since 2003, first by extremist Muslims and now by IS members seeking to enforce their esoteric brand of Muslim rule on the entire Middle East.

Leonardo, Leo to his friends, is an Iraqi immigrant who is now a successful shop owner and a U.S. citizen. A tall, handsome man with an easy smile and perfect white teeth, he happily chats with everyone who comes into his shop.

When he begins to talk about Iraq, a shadow flits across his green eyes and his smile fades as though ghosts of the past have joined the conversation. I wonder, if I’d been in his shoes, how living through the devastation of my country would affect me.

Leo maintains that everything in Iraq started to go wrong in 1990 with the international embargo against Saddam Hussein. At the time, he was a university student in Baghdad, full of hope and promise, working on a Bachelor’s Degree in Mathematics. With his parents, four sisters and five brothers, Leo lived in a 6500 square foot house on 2 acres in Baghdad. His father was a prosperous goldsmith. Life was good.

Leo and family have been members of the Mandaean community, an ancient religious sect, shrouded in secrecy, that existed in Mesopotamia,  part of which is now Iraq, for thousands of years. Mandaeans are known for their gold and silversmiths and their loyalty to each other.

Leo says, “The only good thing Saddam Hussein ever did was to protect minority religions like ours.”

On August 2, 1990, less than two years after the devastating Iran/Iraq war, Saddam Hussein invaded Kuwait and Leo’s world began to fall apart. Shortly after the invasion, international sanctions were placed on Iraq, and the country’s currency, the dinar, collapsed. From 1.86 dinars previously equaling 1 U.S. dollar, by 1991, it took 1200 dinars to buy 1 U.S. dollar.

“At the time, the only countries who were not blockading Iraq were Turkey, Jordan and Iran. People were killing each other over food; electricity was on and off, and water was scarce. My father’s fortune in the bank became almost nothing. “

Leonardo got his Bachelor’s Degree in Mathematics in 1991. That year, after the U.S. and allies routed Hussein’s army from Kuwait in Operation Desert Storm, Leo took a close look at the Iraqi economy and decided to leave the country.

“After the first Gulf War ended, all Iraq was revolting against Saddam. Only Baghdad, Mosul, Ramada and Tikrit were quiet,” he said. “Saddam killed thousands of rebelling Shiites and Kurds. I could see then that things would not get better, ever.”

21 years old, he fled to Jordan. The remainder of his family stayed in Iraq with the exception of one brother, a goldsmith like his father, who had immigrated to California in 1982. During six months in Jordan, Leo, with a gift of the gab that rivals the Irish, talked his way into a visa to Spain.

“In those days, no country would grant visas to Iraqi refugees. I made friends with one ambassador who helped me get asylum in Spain in 1992. I started selling stuff in the subway; that’s how I learned to be 100% independent. From a table, I got a kiosk, and was able to bring one brother to Spain by 1993.”

In 1995, Leonardo immigrated to the U.S. and got a job with his brother, the goldsmith. By 2000, he had enough money to open his own corner store selling liquor, food, and cigarettes where he is today. He works seven days a week, ten to fourteen hours a day, knows the names of all his regular customers, and loves his work.

In 2003, after the 2nd Iraq war, extremist Muslims began a campaign of genocide, slaughtering religious minorities in Iraq. The Mandaean community fell apart. Many fled, ending up in Iran, Jordan, Turkey, Europe and the U.S.

Regarding the ongoing genocide of Christians in Iraq, Leo says, “2003 began a nightmare for most minorities. The Sunnis and the Shias started killing everybody who was not one of them.”

The mathematician in Leonardo still questions the fate of his country; “I think the U.S. made a big mistake. They never looked at the consequences of removing Saddam Hussein after thirty-five years in power. They got Maliki who destroyed the economy of Iraq for eight years. People are still living day to day with rampant disease and shortage of medical supplies, no water, no electricity and garbage everywhere. Even with the oil money, the currency is still crashed. Why has that equation not been solved?” (As of Friday, Jan 30, 1 U.S. dollar equaled 1188.74 dinars.)

The last member of Leonard’s family was not able to leave Iraq until 2007.

Leo and his wife are members of the Mandaean religious community, a close-knit group that numbered between 60,000 and 70,000 in Iraq and Iran before 2003. Mandaeans trace their ancestry in the Arab world to eight centuries before the advent of Islam or Christianity.

Today, he plays down his involvement in religion, and is reluctant to comment on how many people outside of his family he’s helped, saying, “Mostly, I try to do the right thing; I follow the Ten Commandments.”

Like many in the U.S. who’ve escaped from the wreckage of war in their native land, Leo’s not looking for applause or recognition, he’s just grateful for the chance to, “Do the right thing.”

Susannah Morgan
Follow
"Life is what happens when you're busy making other plans," said John Lennon. I was always a writer in my own head and seriously considered reporting from a war zone, but life happened - a husband, three kids and a job - so I wrote when I could. I managed two published novels, now on amazon, wrote a newspaper column for several years in Nevada and have written profiles of people living on California's Central Coast for an online paper. I love people; writing their stories is a privilege.
Website