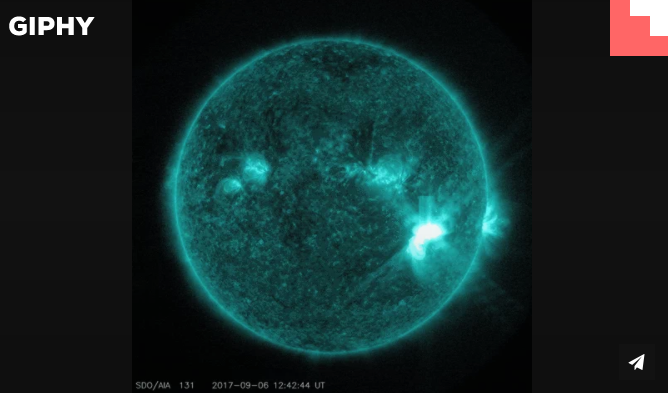 Scientists observed the sun releasing two powerful solar flares on Wednesday, Sept. 6, which are causing strong auroras in the Northern Hemisphere over the next few nights. The second of the flares was the strongest scientists have seen for more than a decade.

The first flare erupted from the sun’s surface at 5:10 a.m. EST. It measured as an X2.2 solar flare. Just 3 hours later at 8:02 a.m. EST, a stronger flare measuring X9.3 was detected, according to the National Oceanic and Atmospheric Administration’s (NOAA) Space Weather Prediction Center (SWPC). The last X9 flare occurred on Dec. 5, 2006 measuring at X9.0.

Solar flares are classified into three categories: C-class that flares have little effect on Earth; medium-sized M-class flares; and the most powerful X-class flares that can result in radio blackouts followed by lengthy radiation storms in the Earth’s upper atmosphere.

SWPC reported radio blackouts coinciding with both flares on Sept. 6.

A solar flare that erupted on Oct. 28, 2003, was the strongest observed in modern times. Classified as an X28, it overwhelmed a spacecraft sensor. Later it was found to have had a peak strength of X45, reported space.com.

Solar flares—bursts of energy like x-rays that travel at the speed of light—are caused by a sudden release of energy trapped under cooler regions on the star’s surface, called sunspots. Sunspots are thought to form from the tangling of the sun’s magnetic field, reports space.com.

Solar flares are accompanied by a blizzard of charged particles called a coronal mass ejection. This blizzard is typically a mix of slower moving protons and heavier ions of helium, oxygen, and iron.

When sun flares erupt in the Earth’s direction, the blast of energy arrives within 8 minutes, while the following blizzard of particles may take between 1 and 3 days to travel the same distance.

The blizzard of ions associated with the Sept. 6 solar flares is expected to reach the Earth’s geomagnetic field. SWPC models anticipate the particles to trigger strong geomagnetic storms from Sept. 7 to 9, which can be hazardous for satellites and astronauts, and could disrupt the power grid as well.

On the upside, the giant cloud of charged particles is likely to create brighter auroras extending to regions of Northern U.S. and Canada not usually able to view them. Aurora observers can check the SWPC’s 30-minute forecasts to gauge the intensity of auroras in their area.

“It’s a mid-range event, but if it’s a chance to see the aurora in the northern tier of the lower 48 [degree latitude line], we’ll certainly take it,” Robert Rutledge, lead of operations at the SWPC, told Fast Company.

Who can view the Northern Lights?

Those south of the Canadian border as far south as Arkansas might be able to see the northern lights from Thursday through to Saturday night, according to SpaceWeather.com. Other states from where the auroras may be visible from over the next few nights include Maine, Connecticut, New York, Kentucky, Indiana, Missouri, Delaware, Michigan, Minnesota, North Carolina, Ohio, Iowa, Maryland, Virginia, Vermont, North and South Dakota. Montana and Washington may be able to view the lights if the smoke from the wildfires clears in time.

Those in Europe as far south as Scotland, Northern Ireland, the Midlands in England, Northern Germany, Denmark, Northern Poland and others may also get a glimpse of the lights.

The sun is now heading into a trough in the 11-year solar activity cycle, according to NASA, so solar flare activity will not be seen as frequently.

“Just like weather on Earth, space weather has its seasons, with solar activity rising and falling over an approximate 11-year cycle,” according to NOAA.