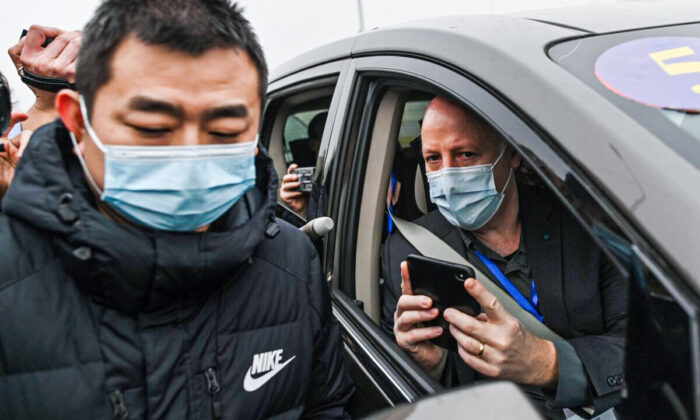 Peter Daszak, a member of the World Health Organization (WHO) team investigating the origins of the COVID-19 coronavirus, speaks to media upon arriving with other WHO members to the Wuhan Institute of Virology in Wuhan in China's central Hubei province on February 3, 2021. (Photo by Hector RETAMAL / AFP) (Photo by HECTOR RETAMAL/AFP via Getty Images)
Congress

Sen. Joni Ernst (R-Iowa) vowed on Nov. 1 to introduce legislation requiring “a full investigation of all U.S. funding of gain-of-function research in China,” and a ban on federal funding to a New York foundation that works closely with China’s Wuhan Institute of Virology (WIV).

“I want to see the Wuhan lab come clean, for EcoHealth Alliance to come clean, and if they don’t, then we’ll have to go for a subpoena,” Ernst told reporters in an afternoon news conference.

“It seems like every week, we are learning more and more about not only the possible origins of the COVID-19 virus, but about our own government’s involvement in dangerous scientific experiments overseas, including at the now-infamous Wuhan Institute for Virology (WIV) in communist China,” Ernst said.

“For years, the National Institutes for Health (NIH) was paying for research on deadly coronaviruses at the Wuhan lab through the EcoHealth Alliance. The NIH gave the money to EcoHealth, which then funneled the U.S. taxpayer dollars into the state-run lab in China.”

Ernst said that after the CCP virus, also known as the novel coronavirus, caused the worldwide COVID-19 pandemic in late 2019 and early 2020, “EcoHealth has refused to cooperate or answer basic questions about how they used our tax dollars in China, even going so far as to violate several federal transparency laws that require disclosure of how taxpayer dollars are spent,” Ernst said.

More than 745,000 Americans are reported to have died from the CCP virus since January 2020.

The EcoHealth Alliance is a New York-based foundation that funds biomedical research around the world, much of it funded by grants the group receives from NIH and other federal agencies.

Much of the NIH funding awarded to EcoHealth was approved by Dr. Anthony Fauci, the director of NIH’s National Institute for Allergy and Infectious Diseases (NIAID), according to Ernst.

She noted that in sworn testimony before Congress in May, Fauci declared that no federal funding from NIH had ever gone to WIV for gain-of-function research (GOF), the experimental lab technique for adding capabilities to viruses to strengthen them and make them more virulent. The WIV has conducted a great deal of such research, and some portion of that research was paid for by EcoHealth.

“Well, lo and behold, that turned out to be false,” Ernst said. “On Oct. 20, NIH made the glaring admission that they had in fact been funding experiments through EcoHealth that very closely resemble what many call gain-of-function. They admitted they were funding EcoHealth experiments on coronaviruses.”

Ernst said NIH removed from its website its previous definition of GOF right around the time of its admission. Fauci had a “legal obligation to know how the taxpayer dollars he was dishing out were being spent.”

The Iowa Republican said she’s been trying for three years without success to get information from NIH about its coronavirus research.

“The only way to get to the bottom of this is to follow the science, follow the money and follow the law,” Ernst said. To that end, she said she’s introducing the “Fairness and Accountability in Underwriting Chinese Institutions Act (FAUCI). This bill completely bans U.S. funding of gain-of-function research in communist China. It also prohibits any federal funding from going to labs and research institutions that receive funding from communist China for gain-of-function research.”

Ernst said the FAUCI Act would also “ensure that any NIH employee or official or grantee that intentionally misleads Congress or the Inspector General (IG) will be ineligible for future federal grants or employment.”

The third part of the bill requires a full congressional investigation of U.S. funding of GOF research.

In addition, Ernst said she will offer an amendment to the National Defense Authorization Act (NDAA) “to cut off funding to EcoHealth. And if EcoHealth continues hiding information from the American people and refuses to comply with the law, that leaves us with just one option, a subpoena.”

Texts weren’t available for the FAUCI Act or the NDAA amendment.

A spokesman for EcoHealth Alliance didn’t immediately respond to a request by The Epoch Times for comment on Ernst’s proposal and remarks.

“We should not be funding dangerous experiments overseas, especially not in one of the world’s most closed societies, ruled by a ruthless authoritarian regime with no tolerance for truth or transparency,” Ernst said.