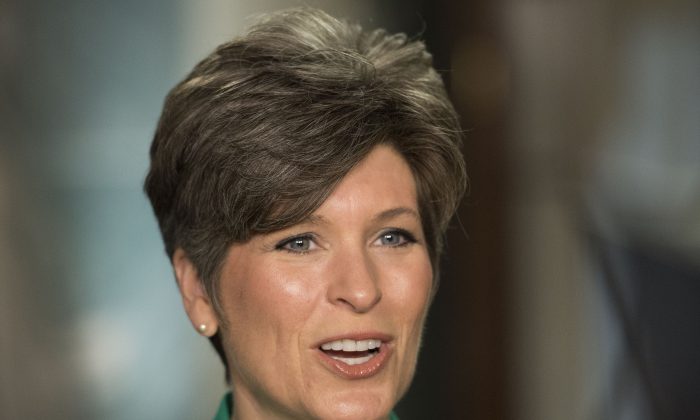 Ernst Calls for Tax Cuts in Response to Obama’s Speech

Rep. Joni Ernst (R-Iowa.) will deliver the Republican rebuttal to president Obama’s State of the Union address. Excerpts from her speech were released to various media outlets. In it she criticizes Obamacare, calls for tax cuts, and mentions a need for a comprehensive national security plan.

“I’d like to have a conversation about the new Republican Congress you just elected, and how we plan to make Washington focus on your concerns again. We heard the message you sent in November — loud and clear. And now we’re getting to work to change the direction Washington has been taking our country.”

“We see our neighbors agonize over stagnant wages and lost jobs. We see the hurt caused by canceled healthcare plans and higher monthly insurance bills. We see too many moms and dads put their own dreams on hold while growing more fearful about the kind of future they’ll be able to leave to their children.  Americans have been hurting, but when we demanded solutions, too often Washington responded with the same stale mindset that led to failed policies like Obamacare. It’s a mindset that gave us political talking points, not serious solutions.”

“There’s a lot we can achieve if we work together. Let’s tear down trade barriers in places like Europe and the Pacific. Let’s sell more of what we make and grow in America over there so we can boost manufacturing, wages, and jobs right here, at home. Let’s simplify America’s outdated and loophole-ridden tax code. Republicans think tax filing should be easier for you, not just the well-connected. So let’s iron out loopholes to lower rates — and create jobs, not pay for more government spending. The President has already expressed some support for these kinds of ideas. We’re calling on him now to cooperate to pass them.”

“We’ve been reminded of terrorism’s reach both at home and abroad; most recently in France and Nigeria, but also in places like Canada and Australia. Our hearts go out to all the innocent victims of terrorism and their loved ones. We can only imagine the depth of their grief. … The forces of violence and oppression don’t care about the innocent. We need a comprehensive plan to defeat them.”

“Congress is back to work on your behalf, ready to make Washington focus on your concerns again. We know America faces big challenges. But history has shown there’s nothing our nation, and our people, can’t accomplish.”