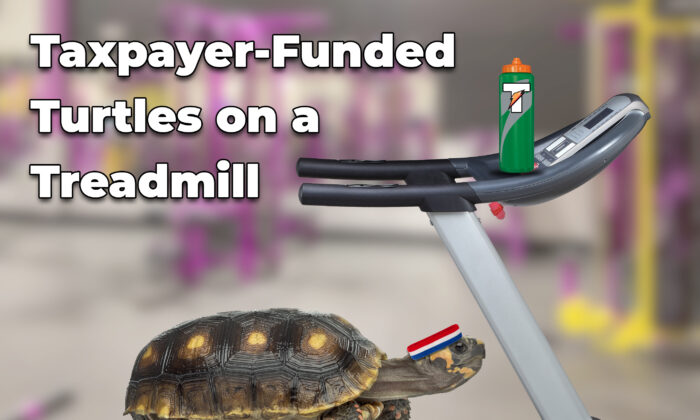 An image used by Sen. Joni Ernst (R-Iowa) in a speech on the floor of the Senate supporting her Billion Dollar Boondoggle Act of 2020, on March 11, 2020. (Courtesy Sen. Ernst)
By Mark Tapscott

WASHINGTON—Federal officials at the National Science Foundation (NSF) and the National Institutes for Health (NIH) spent an unknown number of tax dollars to put turtles, turkeys, and other animals on treadmills to study how fast they can go, according to Sen. Joni Ernst (R-Iowa).

“To no one’s surprise, it turns out turtles are really, really slow,” Ernst told her Senate colleagues March 11 during a floor speech commemorating Sunshine Week.

“In fact, this wasteful study found that turtles moved at nearly the same pace as dead turtles that were also put on a treadmill,” she said. Researchers used X-rays and other equipment to study the turtles’ bone structures and how they move themselves forward, despite being confined in a shell.

But don’t ask how much the turtles-on-a-treadmill study cost because, according to Ernst, “there is no legal obligation for most federal agencies to publicly disclose the price of government projects, even though the American taxpayers are paying for them.”

The treadmill study was funded via three NSF grants and one from NIH, with the current grant running through January 2021.

Sunshine Week, which begins March 15, is an annual celebration of the public’s right to know what their government is doing. The week is sponsored by the American Society of Newspaper Editors (ASNE) and the Reporters Committee for Freedom of the Press (RCFP).

“Sunshine Week is celebrated every year in March to remind us of just how important it is to have government transparency, especially when it comes to how tax dollars are being spent,” Ernst said.

Other examples of unnecessary government spending found by her staff included more than $1.4 billion spent each year by federal departments and agencies on advertising and public relations.

“With our national debt now exceeding $23 trillion, there’s literally no better time than Sunshine Week to start shedding more light on how Washington is managing, or mismanaging, your money. The only reason to keep taxpayers in the dark is because these spending decisions can’t withstand the scrutiny.”

Ernst, who is seeking a second six-year Senate term in November, has made a top priority of combating waste, fraud, and corruption in the federal government’s $4.3 trillion annual budget.

Each month, she publicizes examples of wasteful spending as part of her “Squeal Awards.” Among the dozens of examples that Ernst has highlighted with her awards are:

Shortly after Ernst spoke on the Senate floor, members of the Senate Homeland Security and Governmental Affairs Committee approved the Iowa Republican’s “Stop Wasteful Advertising by the Government Act.” The SWAG bill prohibits the purchase and distribution of swag, merchandise such as buttons, coloring books, key chains, or koozies by federal agencies unless explicitly authorized by Congress.

“This will make it impossible for Washington bureaucrats to continue throwing our tax dollars into bottomless money pits without being noticed,” Ernst said during her speech.

That law is aimed at eliminating payments sent by federal agencies to individuals who are unqualified or dead. The committee estimates that the federal government loses more than $151 million every year to such improper payments and overall has lost more than $1.4 trillion since 2003.

The new law “requires agencies to develop plans to prevent improper payments from happening in the first place and improve methods for identifying programs that are at the highest risk of improper payments,” according to a March 9 statement issued by Peters.